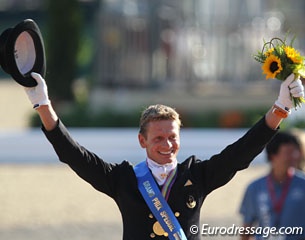 Edward Gal and Cees Visser's KWPN licensed stallion Totilas (by Gribaldi x Glendale) were in total control in the Grand Prix Special at the 2010 World Equestrian Games in Lexington, KY, on Wednesday 29 September 2010. A virtually faultfree ride with plenty of highlights earned them an 85.708% score and made them stand tall and proud on the highest spot of the podium for the gold flanked by a twosome with German roots, that ride for Britain and the United States.

Gal's Special test was superior to his Grand Prix one as Totilas appeared less tense and the rider was actually able to ride the horse instead of anticipating the movements and just bolstering his horse's energy. Upon entry the horse stood perfectly square but went deep again with his head while Edward saluted. The first extended trot sparkled with expression but lacked overtrack. The half pass left went smoothly and there was much crossing over the horse's legs. The first passage was spectacular but uneven in steps, especially on the short side, with more activitiy from the left hind leg. The transition to the extended trot took a while as Edward had to wait patiently for the horse to shift gears without exploding. There was again not enough lenghtening of the frame nor of the strides, but this hardly matters to the judges who still consider the movement good enough for 8s across the board. The second passage was lovely and much more even. The third extended trot was identical to the previous ones: super spectacular but nothing there. 7s and 8s again. 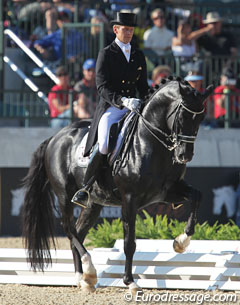 Totilas' greatness lies in the fact that he can go from megalomaniac expression into utmost relaxation in walk. The extended walk was ground covering even though the horse did shake his head quite a few times. The first piaffe and passage were fantastic and especially the second piaffe was a highlight of the test. In the canter work the brilliant pirouettes were the mark-making exercises but the tempi changes remain to be Totilas' overrated weakside. The two's lacked straightness as the hind quarters swung to the right and the horse came behind the vertical, in the one's the throat latch was totally closed and one change was a double beat (scores 6-7-8). Also the one tempi's on the centerline were short behind. The transition from canter to trot was difficult and the stallion almost stalled into walk in order to shift one gear back. The last extended trot had decent overtrack and the final centerline was absolutely brilliant. The judges had no problem at that moment to keep their finger permanently locked on the "10" score button. Even for rider's position Gal earned 10s from all five judges.

"Today he was much more relaxed. I could take a little more risk," said Gal at the press conference. "He gives me a fantastic feeling," he added. 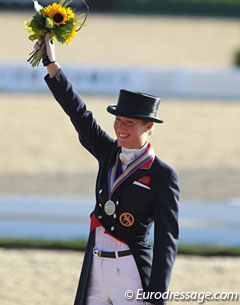 British Laura Bechtolsheimer and Mistral Hojris continued their great form from Tuesday into the Special on Wednesday. The powerhouse gelding is such a complete horse and absolutely has it all: power, regularity, expression, the ability to lengthen and close, connection in his body parts and total correctness in the execution of the exercises. No jittery, twittery stressy stuff but all velvety smoothness. When problems arise in Laura's test it's usually because this mastodonic tank gets too strong and loses some uphill tendency, but so far at the World Equestrian Games this has not been the case and it makes many people wonder why the gap between Totilas and Mistral remains to be so big, even though the latter exceeds the former in perfection and correctness in many movements.

When the combination entered the ring, the horse did look a bit stronger in the hand but Laura kept it all under control. The first two passages earned them mainly 8s. The third passage, which was totally superb, got them three 9s and two 8s. The trot extensions were phenomenal in ground cover and lengthening of the frame. The extended walk was nicely relaxed with three to four hooves overtrack. The first piaffe was lovely, the transition fluent. The second piaffe was even better but the scores got stuck at 7s and 8s. In the canter tempi's the horse became slightly too powerful. The two tempi's involved quite a bit of halt halting and the ones could have been more uphill and the horse changed bigger to the left compared to the right. The left pirouette was super but a tiny bit big, the right one was better. The final extended trot was extraterrestrial but it got them only 8s and 9s (what more do they want for Mistral to get a 10 for that? a black coat?). The final piaffe-passage centerline was goosebumping good, but the halt produced some discrepancies on the score board with marks ranging from 5 to 9. 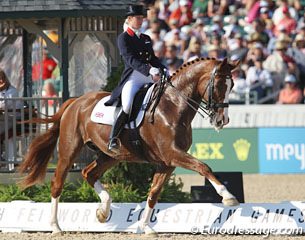 Bechtolsheimer achieved a score of 81.70% to win a world championship silver medal, her second in two days time. Laura admitted her ride in the Special was more difficult. "I’ve worked hard to keep his focus for the Grand Prix special and I’m pretty happy with silver," she told British Dressage. "I probably had a better chance of winning gold yesterday as he was more relaxed – he made me work quite hard today! I didn’t hear my mark for a long time as I was too busy telling my horse he was a legend.”

When asked if she's getting used to standing on the podium and whether she believes the sport has changed from the prima donna aspect, Laura replied, "It used to be either Anky or Isabell. That was a given. Now it is more exciting. There is a really good atmosphere between the riders and it is exciting to be part of the sport when it is developing so fast. It's more open." 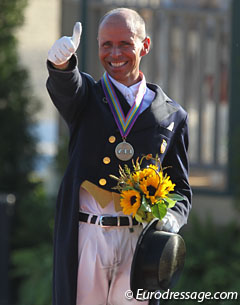 It all came together for Steffen Peters and Ravel in the Grand Prix Special as they got the third highest score of the day: 78.542%. Peters had a beautiful ride on Akiko Yamazaki's Dutch warmblood gelding Ravel, who has muscled up in a year's time and looks more mature and confident in his work.

Their test started out with solid trot extensions, which are not Ravel's forté as there could be more push from behind to enlarge the ground cover, but they are still good enough for high marks. The half passes were brilliant but the first passage-extended trot transition was hesitant. The passage was fantastic in its regularity. The extended walk could have had more overtrack but the piaffe-passage serpentine was delightful but needed more electric. The tempi changes were great even though Ravel swooshes his tail much in the one's. Peters had no problem  riding beautiful pirouettes and he capped off his test with a strong final centreline. His score of 78.542% was well earned but Peters had a bit of help from home judge Linda Zang, who had put him at 81.667% and saw him second best. 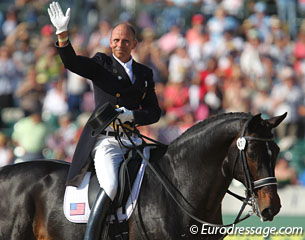 At the prize giving ceremony, the charming Peters cried a river of tears over his grand achievement. At the press conference he explained why he was so emotional. "I have to be honest. I can tell you exactly how many years, days, hours it was to Hong Kong, where I missed that bronze medal," he admitted. "Today was huge. I can't believe how lucky I am that Akiko and Jerry (Yang) allow me to ride this horse."

When Steffen was asked if he felt pressured going into the Special, he replied: "Let's face it. We haven't had an individual medal in the U.S. for such a long time, so I definitely felt more pressure today." 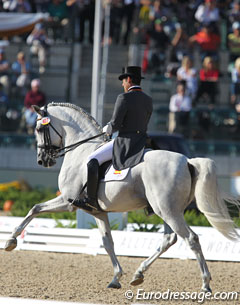 It has been a new Conquest of Paradise by the Spanish 518 years after Christopher Columbus set foot on American shore. Juan Manuel Munoz Diaz and the Andalusian PRE-bred stallion Fuego XII have been producing core-shaking rides and have exceeded the wildest expectations of the judges and spectators.

The Spanish test was gorgeous. The movement mechanism of this horse is typical Andalusian but with the same scope of a warmblood. His tempo is quicker and he gets slightly hectic -- let's say overexpressive -- but this horse has so much balance and a great ability to lengthen and collect the frame in combination with superb elasticity and freedom in the shoulder.

The trot half passes were superb: fantastic in rhythm and so much off the ground. The passage is regular and well suspended and the trot extensions have more lengthening and ground cover than Totilas'.  Unfortunately the extended walk was mediocre, but the canter work was high level. The canter half passes were big and the one tempi's were brilliant: so uphill and still so much ground cover. Their final centerline was superb and the pair achieved 76.042% to finish fourth. A wonderful and well earned achievement for Munoz Diaz, who is trained by Spanish team coach Jan Bemelmans. 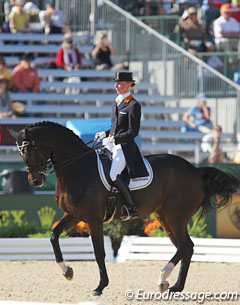 Dutch Imke Schellekens-Bartels and the Smarius family's Hanoverian mare Sunrise (by Singular Joter) ranked fifth with 74.79%. While they stayed faultfree this time, the mare looked better in the Grand Prix. In the Special the contact with the bit was always very present and though Schellekens is a pro at giving minimal aids, the connection between the bit and hands was not as soft as should be and the half halts were often visible.

The pair rode lovely trot half passes but in the extensions there clearly had to be much more overtrack (especially in the third extension for which they still got 7s). The transitions between the passage and trot extensions were fluent. In the extended walk the bay mare was sightly tilting to the right but the overstep was good. In the first piaffe the mare resisted and stepped backwards while tossing her head high up in the air. The second piaffe was much smoother and more regular. In canter the two tempi's were uphill and ground covering but they could have been straighter in the body. The one tempi's were gorgeous as well as both pirouettes. On the centerline the passage lacked push from behind and the piaffe at X was regular but bland. Their score was fairly generous considering the mistakes, notwithstanding  that the solid canter work saved her ride.

"Sunrise did a fantastic test," said Schellekens. "I was very happy with myself and more content than in the Grand Prix because the focus was better. I know what I had to do from start to finish. Even though the first piaffe from walk didn't go that well, I know what the rest of the test had to be like. I left the arena with a great feeling and the fifth place put me in a good position from the kur on Friday." 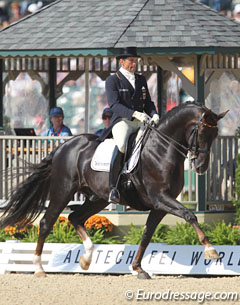 Christoph Koschel became the highest scoring German in the Special as Isabell Werth had a mistake filled ride on Warum Nicht. Koschel, who is a new comer on the German team, produced a solid round with his charming liver chestnut gelding Donnperignon. There was much expression in passage and the extended trots even though the rider on occasion hollowed his back to push for power in the passage. The first passage was a bit too forward, the second was better. The half passes were huge. The horse whinnied in the extended walk but had good overstap. Donnperignon traveled too much forward in the first piaffe and there was a loss of rhythm in the second one. The canter work was high class with great tempi changes, good pirouettes and a super canter extension. The combination scored 73.292%.

Even though there were no Germans on the podium for the Special, it was the only country with four team riders finishing in the top 15 of the class. Only three riders per country are allowed in the Freestyle so Koschel, Werth and Balkenhol will be moving on while Rath has dropped off. The Netherlands has only two riders in the Kur to Music Finals, Great Britain also two and the U.S.A. one.