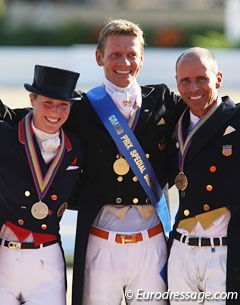 FEI Press Release -- The sensational partnership of Edward Gal and Totilas made Dutch dressage history today when becoming the first combination from The Netherlands to win the World Championship Grand Prix Special title at the World Equestrian Games™ in Kentucky, USA. But this extraordinary pair are also on the brink of adding another record to the list they just keep on compiling.

If they can add Friday's Freestyle to their haul, then they will become the first partnership ever to take both titles, and on present form they look well-set for a hat-trick of gold after yesterday's team victory.

Silver medallist Laura Bechtolsheimer set a new British record when beating the score she set at the Alltech FEI European Championships™ in Windsor (GBR) last summer, while Steffen Peters and Ravel took bronze for the USA. Peters was emotional afterwards. "I've been counting the days and hours since I missed that bronze medal in Hong Kong (Beijing 2008 Olympic Games)" he pointed out, "so this means a lot to me. I can't believe how lucky I am, what he (Ravel) did for me today was unbelievable". And Bechtolsheimer also became the first British rider ever to take World Championship silver in the Special. The previous best British result was bronze for Jennie-Loriston Clarke and Dutch Courage back in 1978 at Goodwood (GBR).

It was Holland's Imke Schellekens-Bartels and Hunter Douglas Sunrise who held the lead as the final five partnerships took their turn in the arena. And the Dutch duo's score of 74.792 was unchallenged by the defending champion, Germany's Isabell Werth, whose 14 year old gelding Warum Nicht was unsettled throughout his test, producing a score of 72.000 that was only good enough for tenth spot in the final analysis.

Peters was next to go, and to the delight of the home crowd swept Schellekens-Bartel's target aside when firmly posted into pole position by all five judges. But the German-born rider's time at the head of affairs would be short, as Bechtolsheimer, with her exquisitely light touch, steered Mistral Hojris to improve on the American's score by almost three full points.

Second-last into the arena were the crowd-pleasing partnership of Spain's Juan Manuel Munoz Diaz and his delightful dancing stallion Fuego X11 Their score of 76.842 would leave them just out of a medal position, but Spain's rising fortunes in the sport of dressage have been clearly evidenced this week and the Andalusian stallion and his rider, who first rose to prominence when winning the Spanish Championships in 2008, today threw down the gauntlet as top-level contenders.

A CLASS OF THEIR OWN 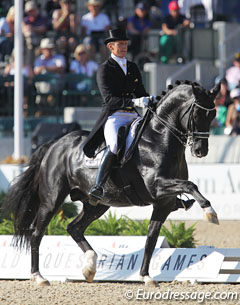 Gal and Totilas however were once again in a class of their own. From the outset, judges Cara Witham (CAN), Stephen Clarke (GBR), Mary Seefried (AUS), Maribel Alonso (MEX) and Linda Zang (USA) rewarded the passage and piaffe with nines and tens and it seemed the score might come dangerously close to the World Record 86.460 they set in Aachen (GER) this summer. That didn't quite happen despite straight tens for the final passage and more straight tens for Gal's riding position as the scoreboard showed 85.667 but the victory was, once more, beyond a shadow of a doubt.

Firsts are now all in a day's work for the Dutch stars, and Gal said afterwards that the stallion was much more relaxed than he had been yesterday, "and that meant I could take a little more risk today" he pointed out. Asked how it feels to ride this much-admired horse who has already established a legendary reputation he stumbled to explain, as he always does. "It's so difficult to describe the feeling" he said, "you'd have to ride him to feel it and that's something I won't allow!" he said to a wave of laugher. "I know he's always there for me, he doesn't want to make any mistakes even when I screw up. He's such an amazing horse" he added.

Bechtolsheimer reflected on the fact that the sport is developing so fast and the standard is constantly being raised. "The guys just keep getting better and better, and it's a lot more open now. It used to be just Isabell and Anky (Van Grunsven/NED), but now quite a few of us feel like we have a chance and it makes the sport more exciting" she pointed out.

She's been in amazing form herself this week, and in Friday night's Freestyle she will be hoping that she might just get that chance and take full advantage of it. But the one they all have to overcome is the black stallion whose record-breaking run just seems to go on, and on.......

Ground Jury President Mary Seefried, when asked about the best elements of the performances of the riders today "for the first three it was harmony with the horse, the horses are so well-trained and responsive that the riders can create great energy. For the Spanish horse it was his wllingness to work - he must give a great feeling to his rider".

Edward Gal, commenting on a rumour that Tolilas has been sold to the USA "I've heard those rumours too, but I can confirm there is nothing going on!"

Laura Bechtolsheimer "I felt quite short on the podium between these two guys today!"