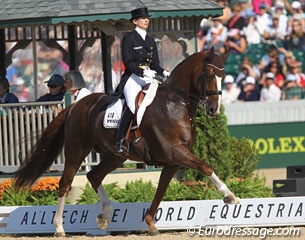 German Anabel Balkenhol bit back in the Grand Prix Special at the 2010 World Equestrian Games in Lexington, KY, on Wednesday 29 September 2010. The first 16 riders out of 31 competed this morning and Anabel Balkenhol is provisionally in the lead with a 72.625% score. After a stressful and unsettled ride in the Grand Prix, Balkenhol this time rode her sensitive and spooky Hanoverian gelding full throttle.

With good result! The chestnut looked fantastic in the trot tour and showed super piaffe and passage. This gutsy ride might have earned her a ticket in the freestyle finals. 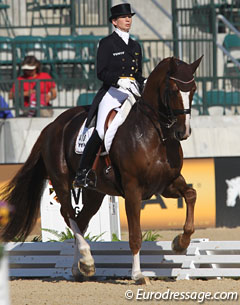 When Anabel entered the ring it was obvious she meant business. Dablino was once again more interested in the surroundings, but while traveling the arena "Belli" pushed him into a phenomenal extended trot and got him focused on her instead! The trot extensions were world class: ground covering and very expressive. Even though Anabel still flexed her horse and half halted him in the corners to keep him centered, the movements were executed with much care. The passage was fantastic in rhythm and regularity, the piaffe was sweet. The second piaffe still had to be more on the spot. In the extended walk, Dablino was tense which compromised the clarity of rhythm. The one and two tempi's were big. The right pirouette was too quick but the final trot extension should have earned her 10s. Dablino showed his potential and received 72,625%, this time judge Cara Witham had the highest score (73.958%).

The first to go today, Austrian Peter Gmoser and the black Oldenburg Cointreau (by Canaster x Figaro) is currently in second place with 70.167%. The combination has really matured since last year's European Championships and major progress has been made in a steadier contact with the bit and more regular piaffe and passage. A large crowds of fans cheered him on as Gmoser left the arena after a successful ride at 10 AM this morning. 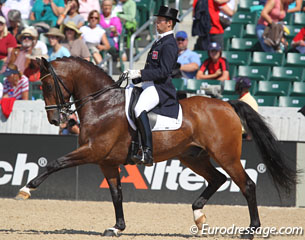 For the first time this week the weather is actually nice. The sky is clear and it is sunny outside. Polish Michal Rapcewicz was the last rider before the lunch break and he placed third so far with his Polish warmblood gelding Randon. The Polish rider, who lives and trains in The Netherlands, started out with hasty unbalanced trot work but his horse settled down in the expressive passage work. Even though the contact is a bit shaky with the horse trying to prop his tongue out on the left side, the horse tons of spirit to give it his all in all the movements of the technical Grand Prix Special test. The pair scored 69.875%.