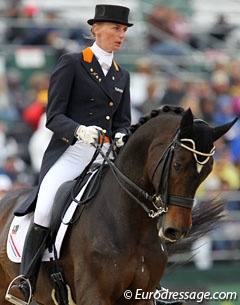 Dutch Imke Schellekens-Bartels and her Hanoverian mare Sunrise (by Singular Joter x Werther) took the provisional lead in the Grand Prix after the first day of competition at the 2010 World Equestrian Games in Lexington, KY, USA, on Monday 27 September 2010.Thirty-one horses went today in the first group of the Grand Prix and the Dutch team took the provisional lead in the team ranking.

Schellekens-Bartels and her bay mare were on form today despite a few mistakes. A major bobble in the zig zag and a mistake in the two tempi's reduced the score to a total of 73.447%. Imke executed a ride in her usual style: one of total control and lightness. The trot work was solid with nice half passes. The halt for reinback was not square but the reinback itself was good. In the first piaffe the mare slightly traveled forward, but the second piaffe and passage were lovely, despite a slightly high croupe in the piaffe. Both the collected and extended walk were very good. In canter, the combination excelled in the one tempi's. The trot extensions could have had more overtrack but they were nice nonetheless.

"She was really really good, and it was the best test I've ever done but I forgot to prepare her for a change and she did what I told her instead - I just made a stupid mistake," Imke pointed out. 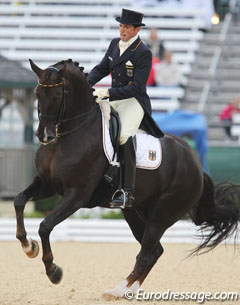 Germany's Christoph Koschel and the Finnish warmblood Donnperignon finished second with 72.638%. The trot work started out smoothly with lovely extensions and good half passes. The passage was bouncy but the first piaffe got a bit quick in rhythm. The extended walk had good relaxation. The second piaffe and passage could have been a bit more settled as the horse lost the rhythm in the transition to and from piaffe. The canter work was very good. Though "Pepe" could have been a bit more collected in the frame, the zig zag was well regulated. The ones tempi's good as well as the pirouettes.

"Pepe was really on my aids and very motivated," said Koschel. "I had so much fun riding him in the big arena. I think I fell asleep in the transition. This cost me a lot of points, so I have to watch out more. But my horse was top."

For Dutch rider Hans Peter Minderhoud the lead up to his ride was a stressful. Two days ago his horse Nadine slipped on the concrete and ended up with scrapes on her hind legs and knees, but the mare was fine and never unlevel.

"I walked her out for some light training on Saturday and she was very relaxed as we came back, so I was riding her on a long rein.  But she slipped and her hind legs went straight out behind her and she fell on her knees and we fell over.  She had scrapes on her front and back legs, but she trotted OK afterwards and she was fine for the vet-check" he explained.

Minderhoud lived up to the expectations and achieved 72.255% to finish third provisionally. "I decided to just go for it and she did her job as she always does.  She has always had a great attitude in the ring," he said. 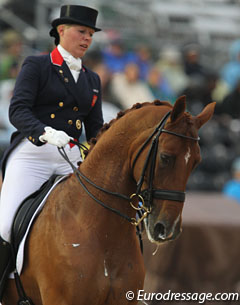 British Fiona Bigwood performed above all expectations and finished fourth after day one. Aboard her mother's Hanoverian gelding Wie Atlantico, Fiona scored 70.128% and put her team in a very strong starting position as she was the first Brit to go. There was some loss of rhythm in the first two trot extensions, but the first passage was lovely, even though the chestnut struggled a bit with finding the rhythm in the first piaffe. The horse always stays nicely up in the frame and has lovely suspension in passage. With great canterwork to top off her ride, Bigwood did her job for the team cum laude.

"I am so happy with my boy," Fiona said. "The Brits were amazing in the stands, cheering like no other nation. Let's all hope for a team medal."

U.S. rider Katherine Bateson-Chandler and Jane Clarke's 15-year old Dutch warmblood Nartan (by Jazz) are the rookies on the U.S. team and ended the first day of competition with her ride. The elegant, sympathetic American is slowly but surely becoming a combination with her newly acquired massive bay gelding. The trot extensions was nice, but conservative in ground cover and expression, but the piaffe and passage were rhythmical and off the ground. In canter, Bateson rode a super zig zag but there was a mistake in the one tempi's. Otherwise her marks would have been higher than her still great 69.617% score.

More photos below in the image gallery