Riders Thrilled with Organization and Atmosphere at 2010 World Equestrian Games 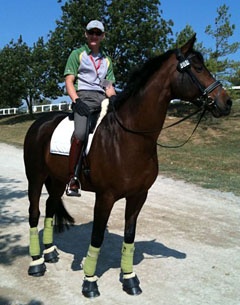 Australian Hayley Beresford is on cloud nine. "Aussie, aussie, aussie..... so cool to be a part of a fantastic team and loving mixing it with the eventers, the reiners, the paras and the endurance. Looking forward to all the others coming soon! I love Australia!!!!!"

Belgian WEG team rider Stefan van Ingelgem had to fly back to Belgium this morning to support and assist his family after the unexpected, sad passing of his father. Van Ingelgem's mount Withney van 't Genthof will be kept in shape and Van Ingelgem should fly back on Monday in time to compete in the Grand Prix on Tuesday 28 September.

German Anabel Balkenhol is also having the time of her life in Kentucky. " I am so excited to be here," she wrote. "Dablino is doing great! It is so much fun to train him! Out teamspirit is great- we have a lot of fun together! It seems that all the riders enjoy to be in Kentucky!!!"

Matthias Rath reported that he and Sterntaler have been training some movements from the test again. "It went really well, riding the different movements after each other," Rath wrote. "It's all part of the final fine-tuning between Matthias and Sterntaler before a competition."

Gate inspection becomes more strict every day. "The past few days everybody could enter the Horse Park and only the stable area was well controlled," said Rath. "But since this afternoon people from the military and police are handling the security in the Park now. The organization is really good." 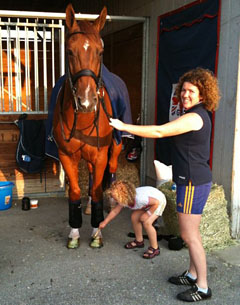 The British riders have been visiting a few racehorse yards in the area, including the one of Sheik Mohammed Al Makhtoum (husband of FEI president Princess Haya). Fiona Bigwood wrote that, "one stallion has 150 mares a year at 150,000 dollars a time and they have to cover 3 x per day!! that's hard work!"

Swedish Patrik Kittel focused on some basic training with Scandic. "Basic basic basic," he wrote. The pair has his "first lesson all about basic." The Swede was "super happy with Scandi-man (...) we both love being here." The weather continues to be hot in Kentucky. "The temperature is not going down so most of the horses now have big Fans to cool them down and you can tell the Usa team is well known to this and super in shape."