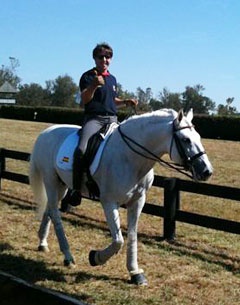 Many riders are having a first few relaxing days before slowly getting their horses into gear for the official start of the 2010 World Equestrian Games in Lexington, KY. So far the riders have not yet got access to the main show ring as the arena is being prepared for the opening ceremony. A big stage has been set up in the middle for what should be a glorious opening party on Saturday 25 September 2010.

"The beautiful judges' boxes are still waiting on the side to be used," wrote Christoph Koschel. The Germans schooled their horses early in the morning right before taking the time to explore the city of Lexington city. In the afternoon, Matthias Rath went to the gym for his fitness routine.

Adelinde Cornelissen also picked up her training with Parzival. "Rode Parzival this morning," she said. "Started some more serious training. Rest of the day the usual: eating, sports, enjoying the sun!" 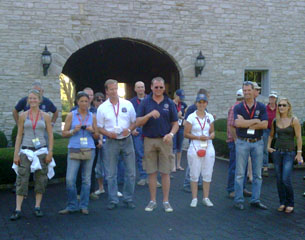 The Belgian dressage team only recently settled in at the Horse Park. Today all horses were checked by team veterinarian Jef Desmedt. Their temperatures were checked and they were trotted on the hard surface. Afterwards the horses got their first light training session with much walking. "The entire Belgian delegation went to Keenland Race Sales and Ashford Stud afterwards," Jeroen Devroe's partner Carmen de Bondt told Eurodressage. "We've had an amazingly warm welcome from Carl Bouckaert." (Former Belgian Olympic eventing ride who lives in Georgia, USA). 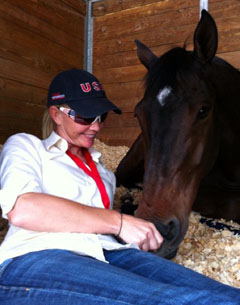 Danish rider Mikala Gundersen has been asked to go to Kentucky as well as traveling reserve for the Danish team. Aboard Horses Unlimited's Leonberg (by Lonely Boy xx), Gundersen competed in the U.S.A. and Europe this show season in an attempt to qualify for the team. As Mikala is permanently based in Florida, U.S.A, the trip to Lexington is only a short one for her. "Leo is on the truck and I am on the plane. We will meet up tomorrow in Kentucky," Gundersen wrote.

American team alternate Catherine Hadded blogged that she and Winyamaro (by Walt Disney) are on stand-by at Reese Koffler's farm in Georgetown, KY, only 10 miles from the venue. "Since W and I are the reserve combination, we are not allowed at the venue unless we are called up to substitute for another pair," Haddad wrote. "We stay on standby at Reese’s place until the vet check is complete and all four American horses are given the thumbs up to start at the WEG."

Even Canadian Evi Strasser has been called to stand by with Quantum Tyme as reserve. She is now with the Canadian team at Kathy Priest's Woodspring Farm. 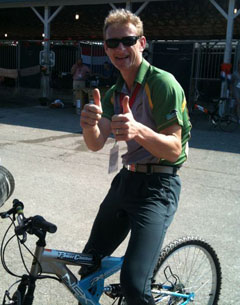 In her blog on the Chronicle of the Horse Haddad praised the professional preparation the American team is getting from everyone involved at USET. "The combination of Anne Gribbons and Steffen Peters working together on the ground has greatly contributed to the improvements I have seen in our horses during the training camp at Gladstone. Supplementary training—like videotaped test rides and discussion with top judges and meetings with the sport psychologist—has also been a real plus in creating a strong, solid team."

Swedish Patrik Kittel rode his horse Scandic (by Solos Carex) for the first time. "Scandi-man looks like he loves it here," Kittel reported. "Fit as a youngster, riding was alot of Hooooo today."

By the way, Australian Brett Parbery will be celebrating his birthday on 23 September!