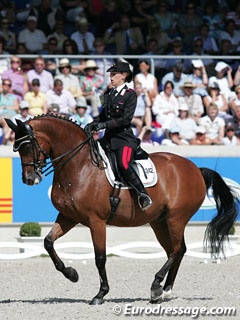 Italy's best performing dressage rider of the moment, Valetina Truppa, will not be competing her 9-year old Italian bred Eremo del Castegno (by Rohdiamant x Weltmeyer) at the 2010 World Equestrian Games in Lexington, Kentucky. Issues concerning insurance coverage for travel and competing at the WEG have made the horse's owners decide to withdraw from WEG participation.

Valentina's father, O-judge Enzo Truppa, commented that, "Eremo del Castegno is not owned by the Truppa family, but we have obviously made an agreement  with them to ride this high talented gelding the coming years, with the goal of the 2012 London Olympics."

The risk to transport a high valued horse by air and subsequent quarantine is considerable and Eremo's owners requested for an insurance, of which the annual price would be around 60,000 euro. The Italian Equestrian Federation (FISE) agreed to help find sponsors to cover the insurance leading up to the 2010 World Equestrian Games, but at the final hour told Eremo's owners they did not succeed.

"Eremo is in top form and getting bettter and better every day," Truppa told Eurodressage. "Last week he scored 76% in a FISE training seminar with Katrina Wüst and we have decided that he will be competed in La Mandria, Lyon and Stuttgart in near future."