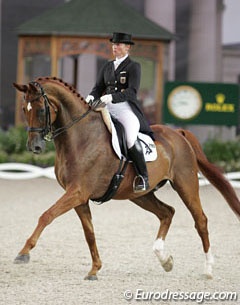 One day before departure to the 2010 World Equestrian Games, German team rider Isabell Werth made the astonishing decision to leave home her 2006 WEG gold medal winning horse Satchmo and take her second ride Warum Nicht FRH to the U.S.A instead. The German team is currently based at Gestut Moosbend in Belgium for a training camp and Werth reached her decision there.

"We've all been riding at the training camp near Liege and the last few days I have been doubting wheter to take Hannes or Satchie," said Isabell Werth. "I had two horses to pick from. Both are in top form but only one can go into the plane. I've made my decision: Hannes will go to Kentucky."

Werth's decision to take her second, "less" high scoring horse Warum Nicht (by Weltmeyer) instead of her top horse Satchmo, a 16-year old Hanoverian gelding by Sao Paulo, is quite surprising considering the fact that Werth has actively worked this show season towards getting Satchmo in top shape for what would have been his (rumoured) final international championship.

Though Satchmo remains to be a safe, top scoring horse, the seasoned competitor has not been so very reliable this season with weaker performances at the beginning of the spring and only gradually reaching a peak at the 2010 CDIO Aachen.  At his last show in Cappeln (mid August), Satchmo produced a Grand Prix test below par with many mistakes, making him the less secure choice for the German team. One week before Cappeln, Warum Nicht on the other hand won the 2010 German Dressage Championships.

Werth had a brand new freestyle especially made for Satchmo for the World Equestrian Games. She has not disclosed if she is going to use her new kur for Warum Nicht or ride to her over-aged "Land of Hope and Glory" freestyle, which she already used in 2006 at the WEG in Aachen.