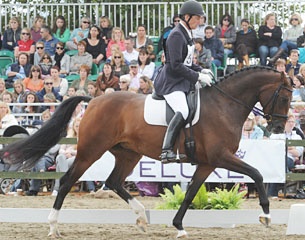 Woodlander Farouche and Retro Hit became the 2010 British Young Horse Champions in the 4 and 5-year old division at the 2010 British Dressage Championships held at Stoneleigh 10 - 12 September 2010. Michael Eilberg steered the 4-year old Woodlander Farouche to the title, while Emile Faurie and Retro Hit were untouchable in the 5-year old international dressage horse championship.

Worcestershire dressage star Michael Eilberg, 23, has taken top honours at the nationals. Riding Woodlander Farouche, an exceptionally talented young mare who showed palpable quality in the arena, he claimed the four-year-old division of the Shearwater Potential International Dressage Horse Championship and went on to stand Supreme Champion of the Young Horse Classes.

The ability of the horse was there for all to witness and judges Peter Storr, Peter Engel and Becky Moody didn’t disagree. After ride judge Moody had hopped on to put the horse through his paces, a quick conference with fellow judges gave the striking chestnut the nod for the Supreme.

The British-bred horse owned and bred by Lynne Crowden is dressage royalty - she is sired by the renowned dressage stallion Furst Heinrich and her maternal grandfather Dimaggio was crowned World Breeding Champion in 2000. Her mother too, Woodlander Dornroschen, is one of Michael’s current top rides.

“You couldn’t start with a better horse,” said Michael, “she has super paces and an engine to die for! You could see, even in pictures as a foal, that she had something.”

“For a four-year-old she’s also really good with the crowds,” he added.

Michael’s feet barely touched the ground during the championships with no less than ten rides on five different horses, racking up several top placings. A highlight was his achievement with Marakov, one of his most experienced horses - with the ten-year-old Latvian gelding he finished second behind world number three Laura Bechtolsheimer in Saturday’s grand prix. This is all the more remarkable given that 2010 is his first year at grand prix, the highest level of the sport.

Oxfordshire dressage rider Emile Faurie from Milton under Wychwood rode his young horse to victory at the championships.

Faurie partnered Retro Hit, a young British-bred mare to head the five-year-old division of the Shearwater Potential International Dressage Horse Championship. Sired by leading Oldenburg stallion Royal Hit and out of a Cardinal mare, the horse who is owned by Kate Byrom demonstrated all the attributes of a future dressage star.

“She has a very active hind leg and you can see what good flying changes she’ll be able to show one day,” said German judge Peter Engel. “She has really nice movement, swinging in the back with three very good paces. She has great rideability too.”

South African born Faurie, 46, has represented GB at two Olympic Games, three World Equestrian games and three European Championships. He is currently at the top of his game with a new grand prix ride, Elmegardens Marquis. The newly formed partnership has made its mark this year resulting in their selection as non-travelling reserves for the World Equestrian Games in Kentucky later this month.