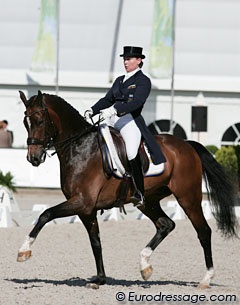 The Swedish Equestrian Federation and chef d'equipe Bo Jena announced the team that will represent Sweden at the 2010 World Equestrian Games in Lexington, KY, USA, on 27 September - 1 October 2010.

After the final selection trial at the 2010 Swedish Dressage Championships in Stromsholm last weekend, Jena was able to pick his team. The members are:

The non-traveling reserve is Annette Christensson with Normandie JB.

Vilhelmson, Telde and Haid-Bondergaard were the top three placed riders at the 2010 Swedish Championships. Patrik Kittel and Scandic were the best Swedes at the 2010 World Cup Finals in 's Hertogenbosch, but his Dutch owned stallion injured himself this spring but should be fit and ready for the Games.