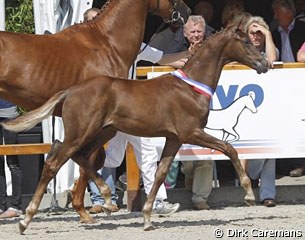 The chestnut colt Ferrari has been proclaimed KWPN Foal of the Year at the 2010 KWPN Paardendagen, hosted at the KWPN head quarters in Ermelo, The Netherlands, on 20 August 2010.

Bred by J.A.M. van Deurzen from Nuenen, The Netherlands, the chestnut colt Ferrari is by Apache out of keur mare Vivaldi by Jazz. Judges Marjan Dorresteijn, Augusta Landsheer and Toine Hoefs selected this foal as the best dressage foal from the lot.

"This is a foal which lives up to the breed standard," said judge Toine Hoefs. "He moves easily and especially the smooth canter stands out. He is a complete foal."

The filly Fancy T was named reserve champion. This Vivaldi x Havidoff offspring is bred and owned by Toonen-Arts from Odiliapeel and stood out with her lovely front leg usage and suppleness.

For Pleasure Z (by Armani x Metall) ranked third. This colt is bred by Zeewuster from Westerbork, The Netherlands, and showed off three smooth paces and a correct conformation