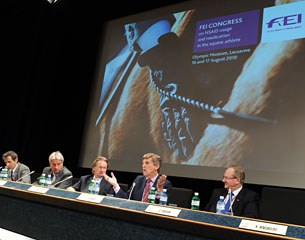 The FEI Congress on Non-Steroidal Anti-Inflammatory Drugs (NSAID) Usage and Medication in the Equine Athlete has been hailed as an invaluable contribution to the debate on the in-competition use of NSAIDs.

In a ground-breaking approach by the FEI, the Congress brought together the most up-to-date scientific data and non-scientific aspects of NSAID usage for over 200 delegates from 29 countries at the two-day Congress, which wound up at the Olympic Museum in Lausanne, Switzerland, today.

The second day of the Congress clearly demonstrated that this is a debate that cannot be viewed purely from a scientific perspective and that ethical values and legal issues also have to be taken into account.

Following yesterday’s mainly science-based presentations, FEI General Counsel Lisa Lazarus opened this morning’s session by outlining details from nine European countries that prohibit or may prohibit the use of NSAIDs under national law.

In light of these legal issues, Ms Lazarus stated that the FEI has two options: either abandon any proposed change in the treatment of NSAIDs, maintaining the status quo that NSAIDs cannot be administered to sport horses during FEI competition anywhere in the world; or permit the use of NSAIDs at appropriate levels as far as the FEI and its members are concerned, but make it clear to all Athletes and participants that the FEI’s rules do not supersede national law, and that anyone participating in the sport in any of the nine countries must note that national laws prohibit, or may prohibit, the use of NSAIDs.

Lynn Hillyer (GBR) of the British Horse Racing Authority, explained that the Racing Authorities of Europe, Hong Kong, North and South Africa, Australasia, Asia and the Middle East (except Saudi Arabia) rule that horses must not race under the effects of any drugs, but acknowledge that medication is necessary – off the racetrack - to ensure a horse’s physical well-being. “In other words, medication should be an aid to recovery, not a tool to enable a horse that should be resting and recuperating to race or train.”

Stephen Schumacher, Chief Administrator of the Equine Drugs and Medications Programme of the United States Equestrian Federation (USEF), stated that the USEF Equine Drugs and Medications Rules allow NSAIDs usage with quantitative restrictions. “We believe that the welfare of our horses is not put into jeopardy with the judicious use of NSAIDs and their use may in fact be beneficial”, he said.

Dominik Burger, President of the Veterinary Commissions of the Breeding Associations for Swiss sport horses, spoke on the breeding perspective. He concluded that the issue would benefit from a pluralistic ethical analysis based not just on the welfare of horse and rider but also on regional and global public values like integrity, equity, justice, duties and responsibility.
Steve Maynard, Laboratory Director at Horseracing Forensic Laboratory Sport Science, outlined that quantitative analysis, applied to determine the exact level of a substance being present in the body, is significantly more costly than qualitative analysis carried out to detect the presence of a substance.

The public perception of equestrian sports, sponsors and the media perspective were all aired in this morning’s panel discussion, when panelist British journalist Brough Scott asked some hard-hitting questions about the possible repercussions of reintroducing NSAIDs in competition.
Sven Holmberg, FEI First Vice President chaired the final debate on the pros and cons of the in-competition use of NSAIDs. Tim Ober (USA) and Mike Gallagher (CAN) spoke for the use of NSAIDs and Peter Kallings (SWE) and Christian Paillot (FRA) spoke against their use.

FEI Veterinary Director Graeme Cooke, who had earlier updated participants on the work of the FEI List Group, summarised both sides of the debate, drawing on key points from all the speakers over the two days. The FEI has achieved a number of key objectives through the Congress, he said, gathering up the science that had become available since 1993, bringing together the scientific and non-scientific, providing an opportunity to hear related views, and ensuring there will be a record of this unique event in order to inform not just National Federations, but everyone with an interest in the debate and allowing for further review before the FEI General Assembly in November.

In his final summing-up, the FEI First Vice President, who chaired the Congress, stressed the importance of keeping the debate alive between now and the vote on in-competition use of NSAIDs in November, so that the decision taken at the FEI General Assembly is one that is founded on sound knowledge and in the best interest of the sport and the horses.

“There is no doubt that both sides of the Atlantic and the rest of the world have the same clear goal in mind: that the welfare of the horse is really paramount to whatever we do”, he said.
A report on the Congress will be sent out to all National Federations, and the FEI website will continue to offer a feedback area for comments. To maintain the flow of information for National Federations that were unable to attend the Congress, videos of all speeches and power point presentations, as well as the panel sessions and full debate, will be made available on the FEI YouTube Channel later this week.