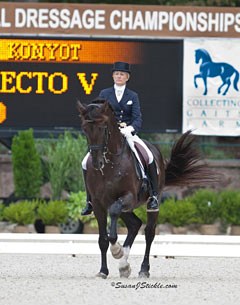 Tina Konyot closed out the 2010 U.S. Grand Prix Dressage Championship in impressive fashion to sweep the four legs of competition and stamp herself and Calecto V and win her very first National Grand Prix Championship.

Konyot (Palm City, FL) and Calecto rocked to music by KT Tunstall and brought the full house down to Black Horse and the Cherry Tree at the USEF Foundation Headquarters. Over four rounds of competition, two Grand Prix, the Grand Prix Special and today’s Freestyle Konyot and Calecto never wavered demonstrating extravagant movement and displaying the incredible strength of their partnership.

“My first weekend, my horse was a little tired,” said Konyot. “Be he never says no. He never, never says no. He had six days to work coming back from Europe and he performed well. The Grand Prix was good – which is the most important test for us.”

Konyot and Calecto V are fresh from a European trip that included good finishes at CHIO Aachen and had limited preparation for this championship. But their performance was still more than enough to win with a four day average of 73.320%. The 12-year-old Danish stallion is incredibly powerful and animated and his freestyle score of 75.750% was the best of the day.

“In the second Grand Prix there were little glitches,” said Konyot. “Today I made the biggest mistake in the world. It was this lovely pirouette and I think we stepped on ourselves coming out of it and he fell into the trot – he was as confused as I was. I was very happy with him otherwise.”

Konyot’s sweep of the National Championship also meant that she won the USEF Selection Trial for the US Dressage Team for the Alltech FEI World Equestrian Games. They will be held in Lexington, KY September 25-October 10 at the Kentucky Horse Park. Konyot won the Kentucky Cup Test Event in April which also got her excellent experience in the main stadium at the World Games venue.

Just behind Konyot was Reserve Champion in the National Grand Prix Dressage Championship: Todd Flettrich (Royal Palm Beach, FL) and Otto were consistent and brilliant throughout the weekend, highlighted by the piaffe and passage in Sunday’s freestyle.

Otto, a 14-year-old Danish Warmblood owned by Cherry Knoll Farm, had plenty of energy left in the fourth phase of the competition and was second in the Freestyle with a score of 75.600% which brought him into the runner-up spot overall.

“I had more fun today,” said Flettrich. “I’m pleased. He was fairly consistent. We had little glitches in each test but not the same problems in each test which makes me happy because I can fix that. The piaffe and passage were the best I had performed. My freestyle is fairly difficult.”

The selection process including two weekends worth of dressage has been in place since the Atlanta Olympic Games in 1996. It has proven successful and all the top finishers in 2010 cited improvements throughout the process.

“I actually feel my relationship with Otto has grown,” said Flettrich. “He actually felt more keen today, I thought he was fresh today. He’s a worker. I love that about him. He never comes to the arena without wanting to please. There were moments I overrode him today. I had bobbles in my freestyle and got a little behind my music… I haven’t had my ultimate test yet. I hope to have it at WEG.”

Flettrich’s impressive freestyle score today was enough to swap places with third place finisher Katherine Bateson-Chandler (Wellington, FL). Bateson-Chandler has only been riding Jane Forbes Clark’s Nartan since May and each movement is a moment that the pair gets to know each other better. She has been doing her diligence practicing the Grand Prix test (which is the Team test at the World Games) so she felt that her freestyle will only continue to improve.

“I’ve learned a lot in the last two weeks,” said Bateson-Chandler. “With him every day matters. I love the music and I think it fits him amazingly but I don’t know it well enough to really relax into the movements.”

The 15-year-old Dutch gelding was produced to the Grand Prix level by Jeanette Haazen in Europe and Bateson-Chandler chose to continue to perform the freestyle that Haazen had designed for him. They scored 72.6% left them in fourth place in the freestyle but in third overall in the National Championship (with a three-day score of 71.127%).

“It’s all been a very fast learning curve together,” said Bateson-Chandler. “But he feels more like my horse now which makes me happy.”