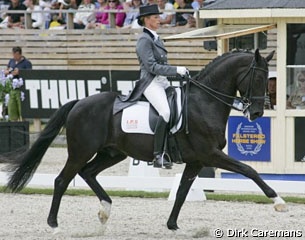 The talented 18-year old acquired the black stallion this week as her future Grand Prix horse.

Barbançon, who finished seventh at the 2010 European Junior Riders Championships in Kronberg four weeks ago, tried out Painted Black the past few days and immediately felt a connection. "He is such an amazing horse," said an excited Morgan. "I could immediately ride each part of the Grand Prix test with him. It was like flying."

Painted Black is ranked 38th on the WBFSH Horse Ranking and Van Grunsven is ranked 6th with him on the FEI Riders Ranking. 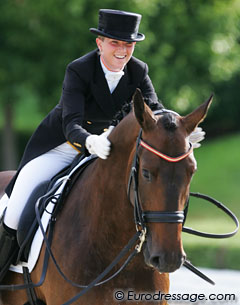 Painted Black is born in 1997 and is by Gribaldi out of keur mare Litchy (by Ferro x Officier). As a 3-year old he finished second in the VSN Trophy and was first AES approved. As a young horse he was initially competed by Hans Peter Minderhoud in the KWPN Stallion Competition, but in 2003 Anky van Grunsven took over the ride and showed him at the World Young Horse Championships in Verden, where they became reserve world champions. Based on this performance, the KWPN society accepted him for breeding in 2004 after a stirring re-approval.

Painted Black made the move to FEI level in 2005 and became Dutch Small Tour Champion and performed strongly at Prix St Georges level at the CDIO Aachen. The stallion made the transition to Grand Prix a year later but needed some time to mature at that level. The competitive highlight in Painted Black's career so far has been a second place at the 2009 World Cup Finals in Las Vegas. In 2009 and 2010 a few minor injuries interefered with Painted's steady competition schedule, but he returned to the show ring in July at the World Dressage Masters in Falsterbo where he won the competition. 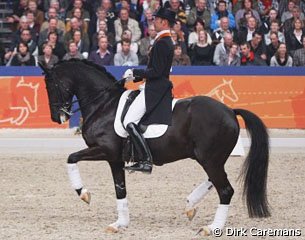 According to Anky.nl, Painted Black will stay available as reserve horse for the Dutch Dressage Team that will compete at the 2010 World Equestrian Games.

The experienced Grand Prix horse will remain stabled at AVG stables and Morgan will be training with Anky herself.