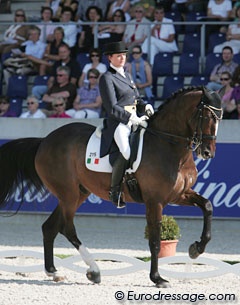 Ireland’s dressage riders Anna Merveldt and Yvette Truesdale have decided not to compete at the2010  World Equestrian Games in Lexington, KY. Judy Reynolds is now the only Irish dressage rider qualified for and intending to compete in Kentucky.

Currently ranked 52nd in the world rankings the Italian-based Merveldt told The Irish Field “I informed the HSI dressage high performance committee last week that I will not be travelling to Kentucky. I have extensive training commitments in Italy and Germany and would be away for three to four weeks. It is a long time to be away.”

She confirmed that despite the best efforts of both Horse Sport Ireland and Dressage Ireland to provide funding it would still prove too expensive for her in terms of income foregone. “I had a good conversation with Robert McCormick [Dressage Ireland Chairman] and both he and HSI have been very supportive but it will still be too expensive for me. I’m always proud to represent Ireland and will be competing with Coryolano at  the European championships in Rotterdam are part of my plans for 2011.”

Anna’s withdrawal comes just two weeks after reigning national champion Yvette Truesdale confirmed that her Kentucky mount Has to be Fun is out for the rest of the year.  The 13-year-old German bred gelding was diagnosed with white line disease in his right fore earlier this year. “It is a huge disappointment” said Yvette “he is recovering but it will take some months. He won’t be available to go to Kentucky or the national championships. My plan is to have him back competing in 2011.”

Related Links
Reynolds, Kanerva Go to 2010 World Equestrian Games, Hartstone Out
Back to the 2010 WEG index