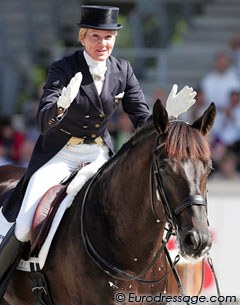 The Grand Prix Special kicked off the third day of competition at the 2010 U.S. Dressage Championships and the class gave the fans another opportunity to see the best dressage horses in the U.S.A. in the freshly renovated Dick and Jane Brown Dressage Ring at the historic USET Foundation Headquarters in Gladstone, NJ.

Saturday’s Grand Prix winner was not going to be denied. Tina Konyot (Palm City, FL) and Calecto V put forward another stellar effort to storm to the top of Sunday’s leaderboard.

Powerful movement and extravagant paces from the 12-year-old Danish stallion were rewarded by the Ground Jury with a score of 72.375% for their efforts in the Special. The Special serves as the second of four parts of the Grand Prix National Championship which also will serve as the USEF Selection Trial for the US Team for the 2010 Alltech FEI World Equestrian Games.

Calecto V has been in Europe where he had a great finish at CHIO Aachen, he has only been back in the US for just over a week and Konyot thinks that he might still be recovering from his busy schedule.

“I honestly think he felt a little bit tired, but I’m very happy,” said Konyot. “He wasn’t at his best. But he gives everything he can – you never have to demand.”

Calecto V has won 10 Grand Prix dating back to Dressage at Devon last fall, and if he is somewhat off his game after his trip, that means he will only continue to improve before next weekend.

Katherine Bateson-Chandler (Wellington, FL) put in a stellar performance on Jane Forbes Clark’s Nartan and in their fifth Grand Prix together, they scored 71.985%, good enough for a second consecutive runner-up finish in the National Championship.

“This was only my second special (with Nartan),” said Bateson-Chandler. “The first one I felt I didn’t ride very well so I was feeling insecure coming into this test.”

Despite the fact that Bateson-Chandler and Nartan have only known each other for three months, their partnership seems to have forged very quickly. Some slight inconsistencies in the piaffe and passage and lack of impulsion in the pirouettes kept her from an even higher score, but the overall quality was very promising for the new pair.

“This test is very new to me with him,” said Bateson-Chandler.
“I had to trust him and trust my riding, I certainly made some mistakes. I was a little conservative yesterday, so today I wanted to show the judges that I be active and uphill and forward.”

Bateson-Chandler gets to know Nartan better with each ride so for her each moment in the ring is an opportunity to improve.
“I think for us being such a new combination, every day matters,” said Bateson-Chandler. “He gets to be more my horse.”

Todd Flettrich (Royal Palm Beach, FL) and Otto continued to show their prowess on a big stage. Cherry Knoll Farm’s 14-year-old Danish Warmblood had a smoother preparation to the ring today and it showed in their very consistent performance. Their score of 69.917% left them in the third spot for the second day in a row.

“I just take it day by day,” said Flettrich when asked about the World Equestrian Games. “Anything can happen; we can all have good days and bad days. I’m pleased, there is definitely room for improvement. The horse performed well, this has been a good show.”

Both Calecto V and Otto recently returned from Europe and despite limited preparation back on US soil for these championships, the experience seemed to improve both combinations.

There are two more legs left in the Collecting Gaits Farm/USEF National Grand Prix Championship and the scores are cumulative over the four classes. The two Grand Prix count for 30% each of the total score, the Special counts for 25% and the Freestyle for 15%.