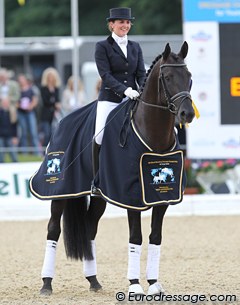 Emmelie Scholtens and the Dutch bred stallion Astrix (by Obelisk x Olivi) won the 5-year old preliminary test by a nose length at the 2010 World Championships for Young Dressage Horses in Verden, Germany, Thursday 5 August 2010. The black stallion, bred by Mr. Ten Bosch and owned by Perlee Stable, scored 8.84 and ranked 0.02 points ahead of Claudia Rüscher on Lissaro van de Helle and Uta Gräf on Damon Jerome H, both finishing second with 8.82.

Scholtens and Astrix were the sixth pair to go and they knew the bar was high today with Gräf in the lead with 8.82. The compact black stallion is a very expressive and flamboyant mover with tremendous suspension and power from behind, but he could have moved a bit more forward through the body instead of up in the air. He was one of many horses today paddling with a front leg. The horse had good self carriage and never lost his balance in the voltes. The walk was high quality with good overtrack and in canter he worked uphill at all times, though Astrix should flex the hocks a bit more. Especially in trot the black could have been lighter in the bridle as Scholtens worked much with her hands to keep her mount in the right posture. The trot on the long rein was lovely, though, with the black stretching his neck forward in a relaxed frame.

The panel of judges, consisting of Elisabeth Max-Theurer (AUT), Angelika Fromming (GER), Susanne Baarup (DEN) and Jennie Loriston-Clarke (GBR), awarded Astrix 8.8 for trot, 9.0 for walk, 8.5 for canter, 9.0 for submission and 8.9 for general impression. This averaged 8.84 points. 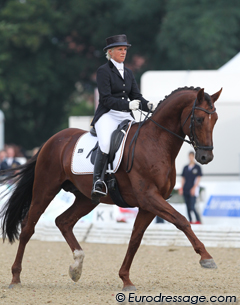 Uta Gräf and the 5-year old Rhinelander stallion Damon Jerome H (by Damon Hill x Guy Laroche) were without a doubt the most impressive pair of the day. Graf presented the liver chestnut stallion, bred by Willi Schneider and owned by Prof. Dr. Thomas Hischold, with wonderful style. The horse was always soft, light and relaxed in the contact and moved uphill in all basic gaits. The way it should be!

Their conservativeness in trot was the only reason why they did not win the test. Damon Jerome has the most amazing lightfooted and elegant trot, but Gräf held too much back in getting more expression out of him. The extensions were lacklustre despite the good groundcover. The medium walk was superb. In canter the stallion was engaged though sometimes he got a bit straight in the leg. The final rising trot with long reins was very good. 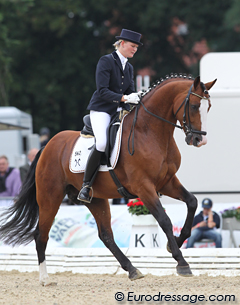 Tying in second place with the same score were Claudia Rüscher and the Hanoverian licensed show jumping stallion Lissaro van de Helle (by Lissabon x Matcho AA). Owned by the Belgian Stud Farm van de Helle, Lissaro had the most amazing canter of the day. The entire canter work was effortless, relaxed and ground covering. Their test started out with some insecure trot work in which Rüscher had to work a little on getting a steady contact, but after three exercises, the young German rider obtained a perfect silhouette and Lissaro marched with same rhythm as a soldier. His walk was superb as well, but in the trot on the long reins the bay, ponyesque stallion should have had his nose out a little more.

The judges scored him 8.4 for trot, 9.2 for walk, 9.0 for canter, 8.5 for submission and 9.0 for general impression. Astrix, Damon Jerome H and Lissaro van de Helle will definitely be the medal hopefuls for the Finals on Sunday and the winning rider will be the one with the faultfree ride with the most expression and the best, light contact with the bit. 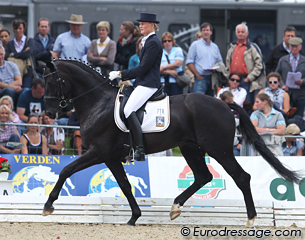 The 5-year old division today included 43 combinations of which 69% were stallions. Sandro Hit was the sire most represented in the class with 11 offspring coming from his parental line. Claudia Rüscher aboard Eugene Reesink's and Antonius Schulze-Averdiek's Westfalian licensed stallion Schumacher (by Stedinger x Weltmeyer) finished fourth with 8.64.

The former reserve Bundeschampion has a super hindleg that is always active and stepping under the body. Especially in trot the black moves with much cadence and self-carriage though the contact with the bit was a bit heavy. The stallion has curbs on his hocks was are slightly distracting for the general outlook. The canter was huge and Schumacher kept his balance well in counter canter. A mistake in the simple change affected the score slightly and the final halt was not immobile. 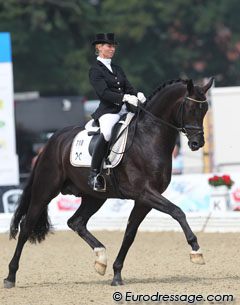 Eva Möller and Paul Schockemohle's Hanoverian licensed stallion Sarkozy (by Sandro Hit x Weltmeyer) slotted in fifth with a generous 8.46. The drop dead gorgeous black stallion appeared distracted in the trot, often going behind the vertical in the bends or tilting his head in the corners. The stallion is delightful to look at and has a lovely silhouette, but in the trot lengthening he went wide behind to keep the balance and he paddled in front. The canter was very expressive and uphill, but the 5-year old occasionally lacked collection. The walk was the highlight of Möller test. Sarkozy has unparalleled overtrack moving over the back with textbook relaxation. 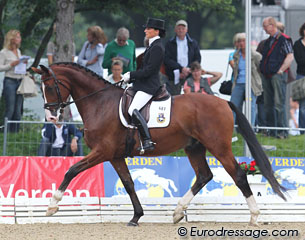 At earlier World Championships Telde presented her horses a bit short and tight in the neck, but with Isac the frame was delightful. The horse was accepting the bit and foaming and he willingly carried out fluent trot work. The walk was good and in canter he moved uphill. Only in the trot on long reins the nose could have been more out. 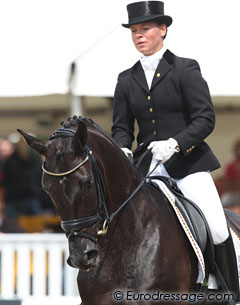 Kira Wulferding tied with Telde in sixth place. The petite German rode Christine Arns-Krogmann's Oldenburg Mare Champion Weihegold OLD (by Don Schufro x Sandro Hit) to an 8.26 score. The black mare was a trotting machine at the in-hand presentation at the Oldenburg Championship in Rastede two years ago, but here in Verden the trot was fairly disappointing. Wulferding was standing in the stirrups and holding onto the reins, while the mare moved underneath her. Though Weihegold has a quick hind leg, there was hardly any swing in the back and the mouth was regularly open. The walk was relaxed and in rhythm, but she tensed up and jogged before the strike off to canter. The canter is her forté with the typical Don Schufro inherited active hindleg. Always working hard from behind, Weihegold showed a well controlled canter tour.

The Young and Restless 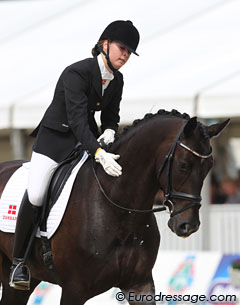 Twenty-two year old former Danish team young rider Camilla Ahlers Pedersen became the shooting star of the day finishing eight with the Danish warmblood Grevens Sa'Va (by Soprano x Romancier). It was the immaculate presentation of this horse by a young rider amidst professionals which made it all very special. The black mare is as thin-boned as a deer and moves with grace, but she lacks elasticity in general and flexion in the hocks, despite the good walk and the quick hindleg in trot.

Danish dressage super hero Andreas Helgstrand seems to be on a mission in Verden to reclaim the World Champion's title. In the 6-year old division he has 2009 gold and bronze medallist Honnerups Driver and UNO Donna Unique, in the 5-year old category he saddled Danish Gold Medal Mare Torveslettens Stamina (by Stedinger x Carano). The gray mare has won everything in Denmark and also impressed in the young horse division at the CDI Falsterbo, but today in Verden the Danish Olympian had to be content with a 9th place and 8.2 score. 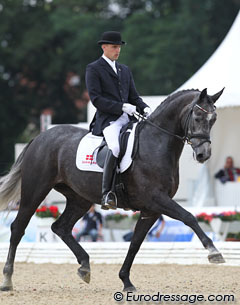 As last pair to go the combination silenced the entire stadium with their test. Owned by Pernille Rugaard, Stamina has a stunning trot in which the rhythm and cadence goes like clockwork. She looks like a show jumper, with long hind legs and shorter front legs, but she has so much power to elevate herself off the ground and float. The walk is her weaker side. Even though there is at least two hooves overtrack, the rhythm got lost on the second diagonal as she shied away from something. Helgstrand was busy keeping Stamina in the frame and he was regularly hanging into the right rein to get her entirely through the neck. The canter work was solid but the mare stalled in the simple change and Andreas rode the transition from right counter canter to trot by ungracefully turning the mare's head all the way to the left while half halting. The proof to the shaky contact with the bit came in the rising trot on the long reins in which Stamina curled herself up instead of stretching her neck in relaxation. Nevertheless, Stamina is a powerhouse mare which has transformed over the months from a show jumper into a solid "pimp-my"ride" super talented dressage star. 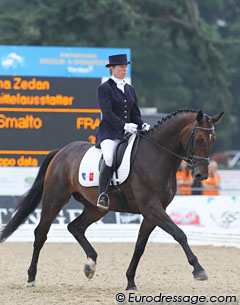 An unfamiliar face on the international scene French Benedicte Smalto surprised by finishing 10th with 8.14 aboard the Dutch warmblood Aptrick, by Tango out of Keur mare Rianda (by Kennedy). The sturdy bay gelding has a robust conformation and moves with much power. Even though the contact with the bit was unsettled, the combination executed solid work in all three basic gaits.