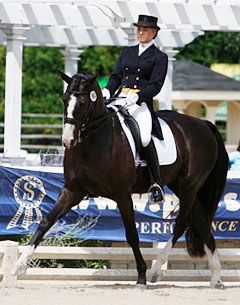 Shawna Harding on Rigo, a nine-year-old gelding, won the U.S. Developing Horse championship sponsored by the Dutta Corp. and Performance Sales International on Sunday 25 July 2010 at Dressage at Lamplight in Wayne, ILL, USA. It is the first national title for the rider.

Shawna of Aiken, South Carolina, and the black Hanoverian by Rotspon (owned by Tonya Rowe) received a score of 73.238% in the championship competition and 69.386% in the qualifying test for a combined score of 71.697 per cent.

Kassandra Barteau of Maple Park, Illinois, on GP Delano moved up to finish as reserve champion on scores of 66.404% in the qualifying test that had tied them in third place and 69.143% in the championship class for a final result of 68.047%. Anna Whitfield-Watkins of Fort Davis, Texas, on Cipriani was third with scores of 68.246% in the qualifying and 67.919% in the championship for a combined total of 67.870%.

Lamplight Equestrian Center in this Chicago suburb which hosted the championships suffered two natural incidents -- flooding of the stabling during heavy downpours and a tree, apparently eaten from the inside by ants, crashed on the stabling late Saturday night. No horses were injured and none appeared any the worse for excitement.

Shawna said that the elegant Rigo needed a couple of days to fully recover from two-day drive with the horses from South Carolina plus the incidents at the stables.

"He's a little horse with a huge heart," she said, "and today he was really on... tomorrow he will be even better. When I asked for him to produce he was there."

Shawna, who has specialized in developing young horses after working in Germany and competing at the Bundeschampionate, said that Rigo had been groomed this year for the Developing Horse Championships which is for seven to nine year old horses.

The next stage is to work toward the U.S. Intermediare Championships in 2011 with hopes of making the American team for the Pan American Games.

"He loves to work," she said. "All of my horses have a good work ethic, something that is instilled in them from the beginning."