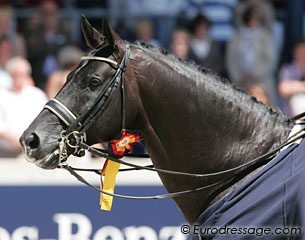 Edward Gal and Totilas are on a hunt for titles. They already are Dutch Champion, European Champion and World Cup Champion and there is only World and Olympic champion missing on their list of achievements. However that won't be a difficult task for them to accomplish in the near future.

On Sunday 18 July 2010, the Dutch duo added another significant title to their record: Aachen Grand Champions.

Next year their name will be imprinted on the glorious "Wall of Fame" on the Aachen grandstand. The pair won the Kur to Music on the last day of competition and became the overall dressage winner with the highest total of points ever achieved by a Grand Prix combination. 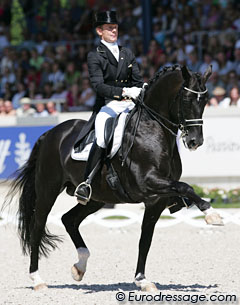 Their freestyle ride was magnificent despite a few minor imperfections. Totilas stood squarely in the halt but had his mouth against his chest while Edward saluted. The piaffe and passage that followed were extraordinary: so harmonious, regular, flowing and expressive. There was no overtrack in the first trot extension regardless of the stunning front leg usage. The second trot extension was better with one to two hooves overstep but in the third it was too much again in front and too little behind and Totilas broke into the canter. The walk was outstanding: super rhythm in the collection and in the extended walk the horse relaxed and stretched the neck properly. In canter the pirouette left was a bit quick but the one to the right was tiny and perfect. In the one tempi's Totilas slight swung the hindquarters to the right and the transition from extended canter to passage was difficult. A final glitch in the communication appeared towards the end of the test when "Toto" jumped a step in the piaffe at A. The end passage was brilliant.

Totilas' music is filmic and heroic and it suits the drama he stirs up amongst the crowds, but it doesn't matter if this horse is walking, trotting, cantering, piaffing or passaging, the music never ever supports the gaits of the horse and there is absolutely no synchronicity between the tempo of the music and the rhythm of the horse even though the FEI rule stipulates that this is the goal to be achieved in a kur to Music. The judges don't care about this lack of synchronicity. Totilas receives between 91.00 and 96.00 for his artistic score. With 90.964% Gal did not establish a third world record of the week, but he was the champion of the pack.

"No my score wasn't a record but it still was a very good ride," said a beaming Edward Gal during the press conference. "I had a small thing on the centerline, but I didn't care about the mistake. That last piaffe was not so nice but I wanted to do too much. It's a small detail, it won't happen again." 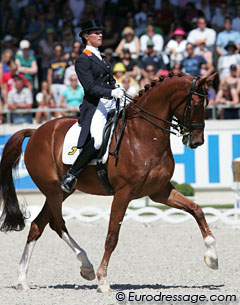 Adelinde Cornelissen and her chestnut gelding Parzival captured a second place for the third time during the 2010 CDIO Aachen. Riding to disconnected bits of music from The Nutcracker and Swan Lake, Cornelissen started with a huge trot extension followed by some elastic piaffe and passage. The first piaffe was perfectly on the spot and rhythmical but in the second one the horse started to cross over with his hind legs and stepped on his own coronet band. Superb trot half passes followed. The canter work was excellent and the pirouettes and tempi changes were well executed to the music, which unfortunately is a too short artistic highpoint in their freestyle. The pirouettes were with much elevation in the front legs and Parzival really took the weight on the hindquarters. The end piaffe pirouette is a fun inclusion in the test and though Parzival usually excels in his regularity and lift in the piaffe, he stepped again on his own feet and jerked his left hind leg higher while turning.

They scored a massive 85.607% and ranked far ahead of the rest of the competition. "I'm very very happy," Adelinde said after her ride. "I rode the freestyle the way I planned it, which hasn't happened a whole lot of times. I didn't need to improvise," she admitted. Next stop on the show calendar for this lovely pair is the CDIO Hickstead where they will compete in the 2010 World Dressage Masters Finals. 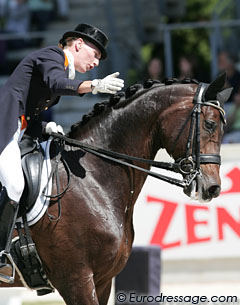 The Dutch podium was completed as Imke Schellekens-Bartels and the Smarius family's Sunrise slotted in third with 81.000%. Imke's three-year old freestyle is composed by Dutch pianist Wibi Soerjadi and has an outstanding synchronicity: Sunrise dances to the beat of the music.

The halt at entry was not entirely immobile and in the first extended trot the mare lacked overtrack. The second trot extension was better. The first piaffe could have been more expressive but the passage was regular and elegant. The collected walk was slightly tense and in the extended walk the Hanoverian mare had good overtrack but lacked some stretch in the neck. In canter the combination excelled in the one tempi's. By the end of the test the mare ran out of steam in passage. The test was totally mistake free.

"I had two days I thought a lot about my riding," Schellekens commented. "The first day I had no mistakes, but she was a bit normal, not expressive enough. On the second day I had a better feeling in the going, I took more risk but I had a lot of mistakes. Today I had the same feeling as yesterday but no mistakes. The music always helps me to ride really well."

There Must Be Some Fun 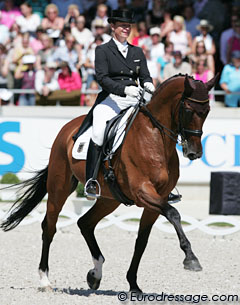 Isabell Werth kept it quite a secret that she was working on a new freestyle for Satchmo but its official premier was at Aachen and it caused quite some commotion. The Kur has tons of German lines in it sung exclusively for Werth by the renowned "Schlager" singer Roberto Blanco. Hints of Tom Jones' She's a Lady are strung in with the otherwise totally German resonating freestyle.

Werth made the crowds laugh when Blanco said "There Must Be Some Fun" right after her entry, halt and salute. She took off in a fantastic extended trot and was smiling from ear to ear (a smiling Werth is a unique as a solar eclipse). The upbeat tempo of the music suited Satchmo perfectly as it put some extra energy in the ride. The half pass left was superb. The collected walk was well regulated and the horse was light in the bridle throughout the test. The two tempi's lacked some straightness and in the ones Satchmo got very tense at the beginning and produced a double beat in one of them. Satchmo kicked himself in the piaffe once. When Werth finished her test the crowds gave her a standing ovation (which Totilas received as well) and they booed extremely loud when the score of "only" 80.786% was announced.

Already straight after the freestyle class was over, Werth's kur was christened as the "Beer and Bratwurst" Kur. The German music is totally fit for fun and the German Aachen crowd bought it like sweet cake, but one can surely wonder how it will be received in the United States at the World Equestrian Games, where hardly anybody will understand the German vocals in it.

"I've had so many freestyles that were heavy like a tragedy and now I wanted something special, something new with a positive intention," Werth explained. "I have fun with my riding and I wanted to show it."

Back to the 2010 CDIO Aachen index