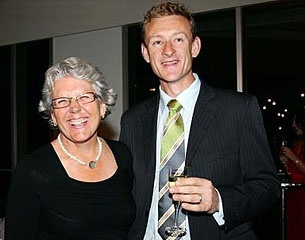 The Australian "Wings for WEG" Gala Dinner on Friday 28 May 2010 became a great success raising close to $25,000. 170 people attended the dinner which was held at Zinc in Melbourne’s Federation Square.

The Wings for WEG campaign has been organised to raise money for the Australian Dressage horses transport to and from the World Games in Kentucky. The Auction raised most of the money. Hamish McLachlan (professional media presenter and son of Dressage rider Sylvia McLachlan) did a fantastic job as the MC and worked wonders at getting the moths out of people’s pockets.

We are thrilled with how the event went and overwhelmed by all the support from both the dressage and wider community. It certainly is a great sport that we are involved with and so nice to get people together in a social environment and to be able to put back into the sport,” commented Fiona McNaught of Boneo Park who instigated the evening and was one of the main driving forces behind it.

“It was a really fun night, great dinner and lots of dancing” commented organiser Sicca van Schaardenburg.  “We had great support from the Equine industry as a whole, many products were donated. If all the States did something similar we could raise quite a bit of money,” added Sicca.

The Australian Equestrian Federation expressed its thanks to Fiona McNaught from Boneo Park who put in a great deal of work to make it happen and to Julia Stewart and Sicca van Schaardenburg.

Read More about the Wings for WEG Gala Ball at Cyberhorse.com<