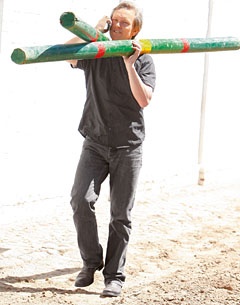 Guest columnist of the week is Jan Tönjes, deputy editor-in-chief at ST.GEORG, a specialised German equestrian publication with highly controversial and outspoken opinions on the state of dressage.

It is the oldest sport magazine in Germany, founded in 1900, and boasts a select team of educated dressage professionals publishing sport and training articles each month.

Stewards must have a discrete presence, be friendly and have psychological finesse (“respecting the tension of riders, trainers and owners”). That is what the FEI Steward Guidlines prescribe, four pages in which much is spelled out in capital letters. For example you can read black on white that it is forbidden to “to go back to the schooling area after a not-so-good test” and school the horses so hard “it draws blood on the sides.”

One cannot think freely about the abyss in which the state of the sport has evidently been for a long time. Seven exclamation marks are used to enforce two sentences. The first one says that “long, deep and round riding (hyperflexion of the neck) is accepted” but it becomes dangerous when copied by unskilled riders. The second sentence says: “There is a fine line between training and overtraining.” Paragraph eight summarizes the conclusion: “We must not be afraid; we are doing the right thing for the horses. If we don’t start acting like a unified body of people now, Stewarding will be dead, as well as the sport. We must take care now so that we do not end up like in other horse disciplines.” Presumably the circumstances in show jumping is what the writers had in mind.

Recently the guidlines were supplemented. The results of a work group were added, which were based on the round table conference in Lausanne in February. Under the direction of Aachen show organizer Frank Kemperman, president of the FEI Dressage Committee, the conference also included Belgian FEI Honorary Dressage Steward General Jacques van Daele, FEI show jumping committee chair John P Roche, Isabell Werth’s trainer Wolfram Wittig and FEI Dressage Director Trond Asmyr. Of course it couldn’t go without omni-present British Richard Davison, who is moderator of the Global Dressage Forum, the annual meeting point of dressage insiders hosted at the home of the Bartels’ Family. A role model dressage stable of what they themselves call “The Dutch School,” which count the neck broken at the third vertebra and fixed backs as the measure of all things.

Davison, who is also a coach, would like to participate as rider at the Olympic Games in his home country. This makes his noble work for a clean sport all well. Davison is amongst those, who consider rolled up necks stretching. In his column in the British magazine Horse and Hound he refers to human training methods, in which hyperflexion is daily routine and only to be reconsidered in case children are forced to overstretch their vertebrae. They can not defend themselves. Davison also writes about the guidelines on part of the FEI. The working group did not provide the angles between head and neck on which basis the stewards can act. Make me an omlet, but don't break any eggs!

One looks needlessly for a definition of how far the chin must be from the chest. But you get three drawings instead which show different neck positions. The horses have the nose behind the vertical, but he who knows how horses are warmed up at international shows also knows the following: if riders were warming up like that, the big outcry and year-long discussions about “rollkur,” a word the FEI dislikes to use, would never have existed.

The stewards, who should be reinforced with the new guidelines, are now actually stuck with the Old Maid. That’s exactly what the Xenophon society, in which people like Christine Stückelberger and Klaus Balkenhol act for what they think is the classical way of riding, point at. In a statement in response to the new steward guidelines the society stresses that “a skilled rider would be able to refer to inappropriate training methods in the warm up with out using agressive aids, once the horse was conditioned to strict obedience in the home training. Just to condemn aggressive riding is not enough since the steward can only sanction an obviously rough impact on the horse while the hidden ones, that also cause a lot of stress to the horse, are neglected”. Riders riding in the LDR technique frequently show completely loosened reins to show how soft their aids are. The discussion on Learned Helplessness brought into focus by Dr Andrew McLean has lost its vigour.

The FEI mission statement is that “any head and neck position obtained through the use of aggressive force is not acceptable..” On the other hand, “movements which involve having the horse’s head and neck carriage in a sustained or fixed position should only be performed for periods not exceeding approximately 10 minutes without change.” Exactly like “overriding” your horse after a not-so-good test.

When stewards evaluate the position of the neck, they will also have to look at the conformation of the horse. Does this mean that a steward’s intervention can be wiped off the table when the rider uses his horse’s conformation as an argument? On the other hand, the diagrams will be used as examples of “extrem” head-neck positions. An ambitious stewards may in good conscience stop the yanking and pulling in the warm-up arena. Especially “rough or abrupts aids” or “constant unyielding pressure on the horse’s mouth” are prohibited. In general single neck positions, which lead to tiredness and stress, should be avoided. The steward has to decide on this. It is common sense that the grooms of top dressage horses are standing at the edge of the warm up ring with a shed ’n blade in hand. Can you imagine the discussion if the horse is sweating due to stress or just naturally?

Will these new guidelines changes things? In the FEI devotional magazine“Horse International” hyperflexion protagonist Sjef Janssen once again was able to tell the tale of the scientific evidence of the gymnasiticizing effect of the rollkur unchallenged. And his student Patrik Kittel called the Internet a brutal weapon. One can not hide what happens weekend after weekend in the warm up arena thanks to the Youtube-effect, which allows for global public visibility. It can also help those stewards, who act courageous in the welfare of the horse, to become famous and respected by a large online community of equestrian people.

(For the "Guest Columnist" section, Eurodressage invites editors-in-chief and renowned journalists from respected, international publications in print and online to share their opinion with our readers. We will be presenting columns on a regular basis in which the invited writer is free to express his opinion on any hot topic in the dressage sport to their personal liking.)