Ingrid Klimke and Damon Hill NRW No Longer a Combination 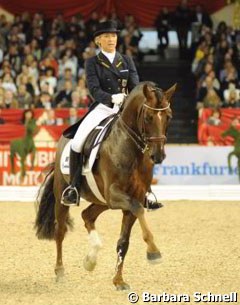 Ingrid Klimke and her young Grand Prix horse Damon Hill NRW are no longer a combination. The owner of the licensed stallion, the Becks family, and Klimke could no longer reach an agreement about the training and handling of this talented FEI horse.

"Damon Hill is now standing at stud at Rüscher-Konermann and will not return to my stable, though initially agreed," Klimke stated. "Unfortunately, the owner and I could not reach a consensus about the management of the stallion, taking into account the training, his show and schedule as well as his health. My years of experience have taught me that a careful management of stallions is essential, especially when they have to combine sport with breeding."

In 2008 the combination became the reserve champions in the Nurnberger Burgpokal Finals (the inofficial small tour championships) at the CDI-W Frankfurt. They competed in the 2009 Medien Cup, making their transition to Grand Prix. In 2010 they were selected for the German Grand Prix B-team.