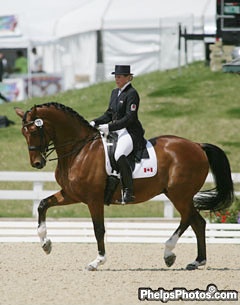 Canadian chef d'equipe Robert Dover announced five North American based Canadian combinations that are invited to compete in Europe in preparation of Canadian team selection for the 2010 World Equestrian Games in Kentucky the last week of September 2010.

"I am very excited to announce Canada’s selection of the combinations for our European Tour of 4 competitions," said Dover. "And there are still some riders who have chosen to remain in North America to try out for the World Equestrian Games in September as per the selection criteria, as well as some combinations doing so also already in Europe, I am thrilled that this tour will give great experience and exposure to this group as we build a medal contending team."

The following combinations are selected for the European Squad. Read Dover's comments about each combination:

Ashley Holzer and Pop Art - This combination is presently placed 14th in the world and with scores consistently over 73% in Grand Prix, they are a force to reckon with in any competition.

Belinda Trussell and Anton - This pair has been fantastic throughout the winter circuit in Florida, winning several major CDI Grand Prix classes with scores nicely over 70%, giving Canada its second star combination.

Bonny Bonnello and Pikardi - Though this combination had a slow start to the Florida season, the amazing talent of this Olympic rider and her horse have never been in question. The great news is that they made enormous improvement, finishing the season with scores well over 70% iat the Lexington CDI Test Event, showing they are also rising stars for Canada.

Wendy Christoph and Pfalsatff- This pair will be representing the west coast province of British Columbia, having just returned from a very successful California season where they finished off by winning both the Grand Prix and the Special in the CDI Rancho Murrieta with international O-judges rewarding them with scores near 70%. The great news is that I am sure this combination has the scope and ability to improve a huge amount on this tour and produce far higher scores.

Shannon Dueck and Ayscha - The youngest horse from this squad, Shannon and Ayscha show world-class talent for all movements and amazing expression which is sure to be rewarded in Europe. I expect great things from this pair over time.

Robert Dover is working hard at finding the right team of four riders that can solidly score at 70% and be a medal contender at Lexington.

"Canada’s riders and horse, both in Europe and North America, will be on the march toward a medal in the coming months and I am very honoured and excited to be a part of their team," Dover added.