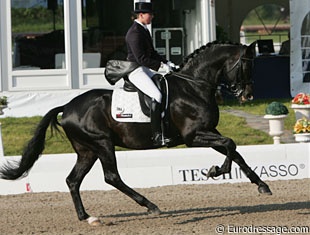 Insterburg TSF, which is bred Hans Derlin and owned by Dirk Schultzke, was trained to Grand Prix level by Carola Koppelmann. The combination won the bronze medal at the 2005 Bundeschampionate and has been successful in the show ring while moving up the levels towards Grand Prix.

Trained by Charlotte and Rasmus Bondergaard, Antonia Ramel aims to compete Insterburg TSF in the Young Riders Grand Prix at the CDI Hamburg on 14-16 May 2010, but she'll also show at the CDN Norrkoping in Sweden.