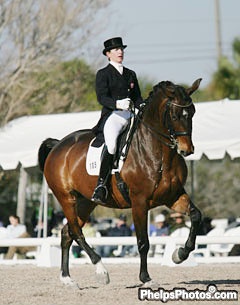 The Florida show season may be over, but Canadians are still competing elsewhere and earning their qualifying scores for the World Equestrian Games team. Wendy Christoff of Delta, BC earned her third score above 65% at the CDI3* Burbank aboard Pfalstaff, her 16-year-old Hanoverian gelding by Palladium. The duo earned 65.830% in the Grand Prix on April 1. One week later, on Friday 9 April, Christoff won the Grand Prix at the CDI Rancho Murieta with a 67.064% total.

Riders must earn four scores of 65% or higher in the Grand Prix test at CDI3* or higher to qualify for a team spot—one of these scores can be carried forward from 2009 and the balance must come from 2010. Scores in the Grand Prix Special and Freestyle will be used as a tie-breaker if necessary.

Currently, there are two fully qualified Canadian riders for the WEG Team — Ashley Holzer of Toronto, ON and Belinda Trussell of Newmarket ON, both of whom are Canadian Olympians. Holzer has been earning consistent scores over 70% with her 2008 Olympic mount Pop Art, a 13-year-old Dutch Warmblood gelding owned by Rusty Holzer and Moreen Nicoll. Trussell is campaigning Anton, a 10-year-old German bred gelding (Antaeous x Saxony) owned by Robyn Eames. Their recent success in Florida includes three scores over 70%.

Christoff and three other Canadians— Victoria Winter and Proton, Shannon Dueck and Ayscha and Olympian Jacqueline Brooks and Balmoral—have earned three out of four qualifying WEG scores at the beginning of April 2010.

WEG-declared riders will also have the opportunity to compete at the CDI3* Lexington in April before the competition season starts at home. The Kentucky Horse Park, site of the World Equestrian Games, will hold a WEG test event for all disciplines, and the dressage portion will run from April 20–22. This event provides riders the opportunity to accustom themselves and their horses to the venue, as well as earn another qualifying score.