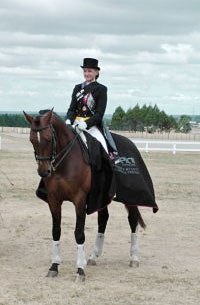 The unassuming 16-year-old enjoyed her career highlight with consistent and exciting performances on her horse of just one year, Veritas. The pair’s win is even more remarkable given it is just their second championship show together at Prix St Georges level.

“It’s been an amazing show and I am thrilled at the result,” said Georgia

Formerly owned by Penny Castle, Veritas is Georgia’s first horse, having competed formerly in pony classes to a maximum of novice level.

“It has been quite a step up,” she admits, “and I have learned so much and still am, every time I come out and compete. It looks so easy but there is so much to know, even down to the rules and regulations for that level of competition.”

Worth enjoyed a clean sweep of the Advanced level this weekend, winning the Prix St Georges with an expressive first test on 65.92% and following up with success in the Advanced Freestyle to Music on 63.05%.

Close behind was another equally new combination, Kelly Van Dyk and her recent import Wohlkahm. The spunky horse exhibited some exciting moments of quality work to finish as reserve Young Rider Champion.

“He’s so much fun,” said Kelly, “but we’re a bit rough around the edges as I haven’t competed for nearly two seasons and we had just one run before here, so we still have a few things to work on and I need to get my test riding back on track.”

Wolhkahm stood out all weekend for his happy attitude and clearly enjoys his New Zealand lifestyle, after his previous competition life in France and Germany.

Katie Cowley and Hu Ra finished third overall, with Rebecca Goldsbury and Glenturret withdrawing following moments of unevenness in their first test, and discovering some stones packed in around the horseshoe afterwards.