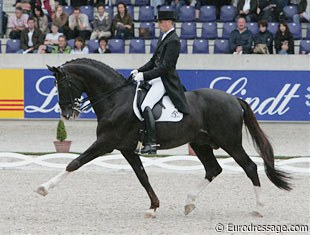 , where owner Blue Hors Stud showed several of its stallions to the public.

The 17-year old liver chestnut stallion achieved 45 victories and top placings in total in Grand Prix classes. The highlights of his career were winning the 2008 Danish Championships and getting the bronze team medal at the 2008 Olympic Games in Hong Kong.

Though Don Schufro has been a highly acclaimed dressage horse, he more importantly stamped international dressage horse breeding with his genes. He has over 20 approved offspring and sired the Mare of the Year in Denmark three times (e.g. Uno Donna Unique) and twice in Germany (Rebelle, Weihegold).