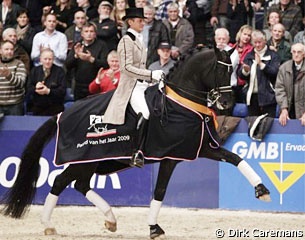 Kees and Tosca Visser's KWPN stallion Moorlands Totilas has been proclaimed KWPN Horse of the Year 2009 at the 2010 KWPN Stallion Licensing in De Bosch, The Netherlands.

"Totilas is an enrichment to the Dutch dressage world, or even more so to the entire equestrian world," KWPN reported. "His enormous expression and spectacular way of moving, his way of making the Grand Prix movements look easy, are thought provoking."

Totilas is bred by Mr Schuil and Mr. Visser. He is born on 23 May 2000 and is by Gribaldi out of Lominka (by Glendale x Akteur). He currently holds the world record score in the Grand Prix and Kur to Music.