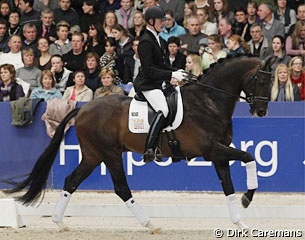 Theo Hanzon and the black licensed KWPN stallion Andretti (by Special D x Sandro Hit) scored a total of 86,5 points and won the L-level division. The black stallion received a 9,5 for his uphill canter and 9 for suppleness and general impression. Emmelie Scholtens and Apache (by UB40) finished second with 82,5 points, while Scholtens also ranked third with Ampere (by Rousseau) on 78 points.

Hanzon also won the title in the M-division, this time aboard the super talented Zhivago (by Krack C x Jazz) with 86 points. The pair fended off Gerdine Marie on Ziesto (by Lancet), who finished second with 83.5. Hans Peter Minderhoud and Zizi Top ranked third with 83 points.

Only a mere two combinations participated in the Z-level finals. The trophy was an easy catch for Madeleine Witte-Vrees and the black stallion Wynton (by Jazz x Matador II). They scored 158 points, more than 12 points ahead of Emmelie Scholtens and Westenwind (by Flemmingh x Contango).