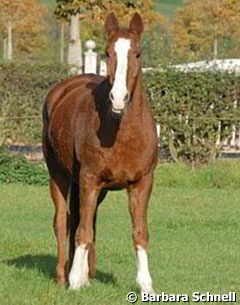 Isabell Werth's chestnut mare Fabienne has been euthanized due to old age. Upon returning from the World Cup qualifier in Amsterdam, Werth discovered Fabienne in poor condition. The 29-year old retired mare was suffering from old age and it was decided to put her down.

Fabienne was a Westfalian mare by Feuerschein I x Dilletant and bred by Ewald Bunge from Nottuln, Germany. She was one of Werth's most successful dressage horses in the early 1990 and the combination won the 1992 World Cup Finals in Gothenburg. The mare was retired for many years and spent her days in the field with Gigolo FRH, who passed away in September 2009.

"In her last years she became good friends with Gigolo," said Werth. "Now the two can put their noses back together in heaven. I'm sad but comforted by the fact that those two had many nice years together here with us."

Life goes on for Werth as she is already packing her bags for the World Dressage Masters in Florida, where she will compete Satchmo. "The pediatrician confirmed that there is no risk for my child, so I'm taking Frederik along. My sister is helping me and will look after him. It will be a nice change to go to 27° sunshine from the cold German weather."