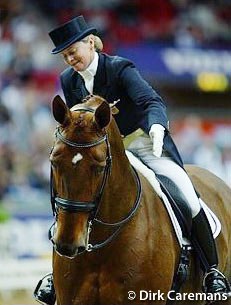 Olympic superstar, Debbie McDonald, has taken on the role of USEF Developing Dressage Coach for the United States Equestrian Federation. McDonald’s name is synonymous with the US Dressage program for the last decade having represented the US across the globe, winning the 2003 FEI World Cup Final and leading the US to Team Bronze at the 2004 Athens Olympic Games and the 2006 World Equestrian Games with her legendary mare Brentina.

The USEF Developing Dressage program has been restructured and the future International High Performance athletes will benefit from McDonald’s experience and expertise through a series of clinics across the US as they prepare themselves and their horses for the future.

“The Developing Program is of vital importance to the future of our sport,” said USEF Technical Advisor Anne Gribbons. “It is meant to establish the basis for the up and coming riders and horses in this country. We are lucky to be in the situation today when we are able to use our own "human resources" to educate our team hopefuls.”

The Developing Program is designed to identify and cultivate future US Dressage stars.

“Under the capable direction of Debbie McDonald, we will create a nationwide program devoted to guiding our riders and their mounts from young horse classes and the small tour to Grand Prix,” said Gribbons.

McDonald, who was named the USEF Developmental Coach of the Year for 2008 for her efforts training and teaching horses and riders, has an exemplary reputation as a coach and a trainer.

“I am very excited to help the development of our sport,” said McDonald. “This is a very good time for the US, having the support of the USEF to start this program up again is exciting. I am honored to be a part of it!”

The dates and locations for the Developing Rider clinics are scheduled as follows (please note that they may be subject to change):

Please note that participation in these clinics is by invitation only and riders will be invited at the direction of the USEF High Performance Dressage Committee.