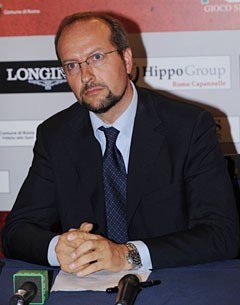 The board of directors of the Italian Equestrian Federation (FISE) has resigned en masse on 4 January 2010. Antonio Giovannoni, Antonio Verro, Fabrizio Ambrosetti, Giovanni Rossoni, Franco Guerzoni and Lalla Novo handed in their resignation by letter to Andrea Paulgross, president of the FISE.

It is argued that this is a strategic move to disband the Board and that the group resignation was a staged act to have the four remaining members, who were more critical of Paulgross' ideas, removed from the board.

In his first year of presidency Paulgross has not yet been able to deliver the coveted structure and programs Italian riders of all FEI disciplines have been desperately craving for. Italian riders of all levels have complained for years about the lack of communication, functionality and serviceability of FISE towards its members.

The riders are also upset about the fact that for the first time a FISE president gets a generous salary of approximately 150,000 euro a year for his work, and Paulgross has not yet produced any major progress within the federation. Each decision made within the FISE has to be approved the Board of Directors, no matter how small or great the decision is. The heads of each discipline committee have their back against the wall because the board refuses to approve any constructive sport program with the excuse that no money is available.

Paulgross reacted to the board's resignation in an official statement on 5 January 2010. "Due to the fact that this office received six letters of resignation at different dates from six members of the FISE board on 4th of January 2010 the FISE Board is disbanded according to the FISE Statutes. President Andrea Paulgross thanks all members for their activity and for the results achieved during his first year of managing the FISE."

Paulgross will be setting a new date for an Extraordinary Assembly at which 10 new members will be elected for the FISE Board.

Due to this organizational turmoil, riders are left in the cold and can not properly prepare for the upcoming 2010 show season. They fear that all sport programs, which include the appointment of national team trainers and chefs d'equipe, will be put on hold for at least the next three months, when international competitions have already started during this qualification year for the 2010 World Equestrian Games.

An Italian source told Eurodressage that the FISE board has much power in giving individual riders opportunities to compete at international shows. "The Board has the right to enter individual competitors at international FEI competitions. The board does not need to justify why it accepts or rejects the request of a rider to be entered in a competition. It is impossible to compete abroad if the Board is against you for whatever reason. No rider or judge or relative can express his thoughts in Italy without running the risk of being banned from international competitions."

That the complaints of bureaucracy and favouritism have reached Paulgross is apparant from the final paragraph of his statement. He mentioned that it is his "strong will to continue with new energy and new people as President. Thirteen months ago, I was elected with the large majority of votes, more than 91%. The new FISE, which I hold in my heart, will be devoted to renew the results, the services, the facilities for the riders and the spreading of the horsemanship at an even higher level. My vision, void of personal or hidden interests, will become evident to the people loving our marvellous sport. FISE will be a big Olympic Federation, efficient, transparent and, I underline, far from private interest, business and political intrigues."