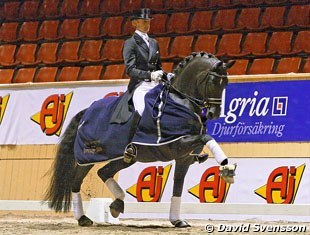 Unfortunately neither of the two won the highly coveted award at the Dutch NOC-NSF Sport Gala held on Tuesday 15 December 2009 in Amsterdam. The awards went to gymnast Epke Zonderland for the Male Athlete of the Year award and the relay swimming team including Marleen Veldhuis, Femke Heemskerk, Inge Dekker, Ranomi Kromowidjojo and Hinkelien Schreuder became the team of the year as they broke the world record on the 4x100 meter at the World Championships in Rome.

Dutch dressage judge Arie Hamoen will become the temporary chairman of the Topsport Committee Dressage of the Dutch Equestrian Federation on 1 January 2010. The 58-year old Hamoen is succeeding Peter van Roosmalen, who received a lung transplant in 2008 and has now decided to become chair of the Dutch "Foundation Transplantation Now."

Karin Offield's Dutch warmblood stallion Hexagon's Louisville (by Burggraaf x Vesins xx) will return to Stal Hexagon in The Netherlands. Louisville will stand at stud at his old home base and have the opportunity to directly influence the mare base of that region and other parts of Europe. Scott and Susan Hassler have managed Louisville over the past few years. "we will dearly miss his charismatic presence and enormously kind nature in our stable every day. We appreciate how much it will mean to Louisville's breeder Leunis van Lieren to have Louisville retire at 'home' and to have the opportunity to produce more top offspring like Wonderella and Wellnetta, both top mares which have shone for their sire Louisville in international sport," said Hassler.

Horsetelex posted that the Dutch warmblood licensed paint stallion Samber passed away at age 33. Bred by the Smilda family, Samber was by the Thoroughbred stallion Pericles xx x Ordonnans x Romeo and got approved for the KWPN society as a 3-year old. He produced, for instance, the licensed offspring Art Deco, Ed King Hill and Sambertino. Owner Jannemiek Vrieling jumped the stallion at Z level while Monique Peutz brought him the Grand Prix dressage level. The 33-year old Samber was suffering from arthritis and the last few weeks he had major stiffness problems. On 24th December the stallion could no longer get up and the owners decided together with the vet that it was in the horse's best interest to put him down.

Canada's chef d'equipe Robert Dover is spending the Christmas holidays in New York. He went to see the Broadway piece "Memphis" and recommends it to all.

The FEI took the opportunity in a letter to Margit Otto-Crepin to congratulate the IDRC for having been recognized as an Associate Member of the FEI, as recognized by the 2009 General Assembly.

In a commentary on the Dressage Task Force report which was brought at the 2009 General Assembly, the IDRC released the following statement:" it is correct of the Task Force to include the issue of the welfare of the horse in their brief. The importance of this has been highlighted once again by the recent resurgence of discussions concerning the use of hyperflexion as a training tool. This has the potential to do the sport lasting damage and must be dealt with as a matter of urgency."Swedish dressage rider Sofie Lexner acquired the 3-year oldDutch warmblood Briljant (by UB40 x Montecristo). Under Sandra Sterntop the dark bay finished third at this year's Swedish Young Horse Championships in Flyinge. Johan Ifverson discovered Briljant in Holland as a 2,5 year old and now sold it to 23-year Lexner who trains with Hasse Hoffmann and who was a recipient of the 2009 Ajax Stipend for talented Swedish dressage riders.

Dutch equestrian magazine De Hoefslag reported that Laurens van Lieren, who started riding and working for his father Leunis at stable Hexagon, has recently moved his business to Craig Rawlins' and Kebie van der Heijden's Stal Korenbloem in Weert, The Netherlands. Van Lieren had an independent business at Wim Zegwaard's place managing over a hundred horses but it turned out that that was too much. He now moved 15 horses to Weert, amongst them the KWPN stallion Citango (by Contango) which he will soon compete at Prix St Georges level. Van Lieren recently bruised his ribs in a car accident and has slowed down on riding. At the moment Kebie van der Heijden is keeping Hexagons Ollright in shape.

Austrian team rider Victoria Max-Theurer announced that she has acquired a new horse, the 7-year old Holsteiner geldiner Luizao (by Leandro x Calvados II), her first Holsteiner ever. The former riders of Luizáo are Jörg Dietrich and Constanze Rugheimer.

Check out the cool promotion video of British Dressage which was recently launched on Youtube. I'm sure you'll be able to spot some famous faces in the clip!