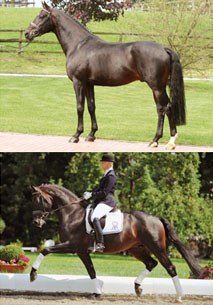 The six year old Oldenburg stallion Diamonit was the most expensive horse of the 30th P.S.I. Auction. The Diamond Hit x Santander licensed stallion from the dressage collection was purchased by the German born but Austrian based Eva-Maria Aufrecht-Retter for 760,000 euro.

Many people had guessed that the approved stallion, which had qualified three times for the Bundeschampionate, would be a treasure of the collection. Diamonit was definitely not the only horse to be purchased in the six digit level.

The total revenue of the P.S.I. Auction was 10,440,000 Euros which was just under the results of last year. Although it proved that quality product is still in demand worldwide.

An Evening of Honour – P.S.I. Awards 2009 presented in Ankum

The 30th P.S.I. Auction in Ankum is more than a high class as well as traditional trading place for quality horses. P.S.I. also represents one of the social highlights of December and has become linked with a distinction which was initiated by Ullrich Kasselmann and Paul Schockemoehle – the P.S.I. Awards. These awards are presented in various categories with the focus always revolving around the horse theme. The characters who have been honoured with the P.S.I. Awards are always persons who have earned their award in totally different ways around the horse. Six women and men were presented with the P.S.I. Award on December 12th.

Frank Henning, entrepreneur, merchant and most importantly a creative director for the equestrian sport, received the P.S.I. Supporter of the Equestrian Sport Award. The man from Dusseldorf bestowed the equestrian sport with a series whose greatest asset is it’s accessibility to the broad public. Perhaps like a rider forum, which moves to the areas where it reaches horse sport enthusiasts, from Heide in Schleswig-Holstein to Dresden. The series “The Old Masters” was created by the same impulse – a series of lectures which brings horsemanship up close. Olympic Team Champion Heike Kemmer underscored in her laudation that it is an unparalleled commitment.

Two for the same cause describes Marina and Toni Meggle in every way. The married couple from Wasserburg is among the most important patrons of the dressage sport – and more importantly – the disabled sport. Evelyn Swarovski recognized the merits of the couple who have such a great love of the sport. Marina and Toni Meggle, successful riders themselves with results in jumping and three-day eventing, are the initiators of the Dressage matinée by the Munich Indoors and two years ago they created an international dressage series, the Meggle Champions. Their very special engagement comes through the support of the disabled equestrian sport. Since 1996 they have supported the members of the Chiemgau North Riding and Driving Club with an annual budget, they support events such as the Bavarian or German Championships as well as members of the groups they sponsor by the Paralympics.

Otto Becker enjoyed the task of creating a laudation for Meredith Michaels-Beerbaum. In 1999 she was the first woman to represent the German team at an international championship, she is the first woman to reach the top of the world rankings for show jumping, in 2007 she won the European Championships, she has won the World Cup Final three times and has won countless grand prix competitions. She has written equestrian history and the 38 year old is an idol for thousands of girls and young ladies. The US born show jumping rider is now expecting her first child with husband Markus Beerbaum – a moment to backpedal and take time to receive the P.S.I. Equestrian Sport Award.

It is often the case that extraordinary characters achieve something in the equestrian sport and one of those personalities is the Mexican Enrique Gonzalez. The show jumping rider who was born in 1964 has represented his country at Olympic Games and World Championships, but these results represent only a section of his work confirmed team colleague Frederico Fernandez in his laudation. In Athens 2004 Gonzalez was required as Chef d’Equipe, in Hong Kong 2008 he strengthened the team and he is a prudent trainer who is ready to help at any time. He has brought the national championships for five, six and seven year olds to the Mexican horse sport and with this has achieved an important contribution to sport and breeding. Enrique Gonzalez received the P.S.I. Personality Award.

The P.S.I. Lifetime Achievement Award was awaited with great excitement. It is a well kept secret that was lifted by Hartmann von der Tann: The P.S.I. Lifetime Achievement Award was presented to Leon Melchior, founder of the Zangersheide studbook in Belgium. Melchior counts as one of the headstrong visionaries of horse sport and breeding. Zangersheide was a show jumping stables in Lanaken, Belgium in the 70’s which grew into a stud farm. Melchior was successful where many others failed – to found his own successful show jumper breeding programme with the best mares and stallions from various warmblood lines. He overcame obstacles, brought in experts and tenaciously and tirelessly worked for his goal. The Zangersheide studbook has become a centre of expertise which has produced many extraordinary horses carrying the memorable Z behind their name. The letter has forged a symbol for excellent show jumping horses which search their equal worldwide because one man followed his idea with passion and commitment.