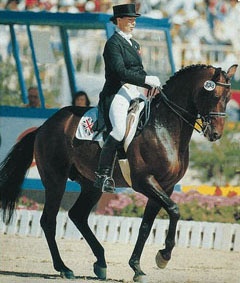 A year after Jennie Loriston-Clarke had conquered an individual bronze medal at the 1978 World Championships in Goodwood on her self-trained stallion Dutch Courage she was given a three years old son of him to break in.

Little did she know in 1979 that Dutch Gold, as the good looking youngster was called, would walk in the footsteps of his famous father one day.

At the beginning the only aim was to break in the bay stallion and bring him on to sell for his breeder. Mrs. D. Goodall from Bleedon in Somerset had bred Dutch Gold in 1976, the second year sire Dutch Courage was breeding. Dutch Gold was out of her failed racehorse Golden K xx, a thoroughbred mare by Golden Cloud xx.

When Jennie Loriston- Clarke started to work with this 3/4- thoroughbred she soon discovered Dutch Gold was very much like his father, although a lighter and finer looking type of horse. Dutch Gold was a very forward going young horse and a quick thinker so he needed an intelligent sensible rider to train him. But as he really wanted to learn and please work with him was a pleasure.

Just when Jennie Loriston-Clarke started Dutch Gold a man called Donald Bannocks phoned her. He wanted to buy a young dressage horse for her. And this is how Dutch Gold became a regular ride for Jennie, although there were some detours before he finally took on dressage as his career.

Despite being an ideally looking horse for dressage, elegant, lightfooted and with very good paces, Dutch Gold first didn't take to this discipline very well. Dressage at the beginning of his career just wasn't enough of a challenge for him. He got bored and because of this quite naughty. But this was no reason for his rider, who evented earlier in her career, to replace the horse, but instead she changed disciplines for him and taught the stallion to jump.

Dutch Gold or „Willow“ as he was nick- named soon proved to be very good at it and won a Foxhunter jumping class. Then he started to event and as this strenuous discipline needed a certain level of dressage Dutch Gold got immersed in it.

So in 1983 the funny and possibly unique situation occurred that the 7-year old won the Midland Bank Championships, a renowned eventing competition in England and only a day after this triumph he traveled to Rotterdam in Holland to attend in his first international dressage show at small tour level.

After that achievement, Dutch Gold's career finally focused on what he was thought and bought for: dressage. Though not very enthusiastic about it as a young horse Dutch Gold now learnt everything very easily and was always trying hard to please. His weak point often transformed to a strength of him: As Willow was part thoroughbred he was highly sensitive and could easily get very excited and hot in a way. But as soon as he got established all this worked in his favour, because then he was so light to ride, enabling his female rider to communicate with him in the finest of ways.

In 1985 Dutch Gold's then legendary father Dutch Courage was retired, but Jenny Loriston-Clarke had his son to go on with her career as an international dressage rider on the British team. So the stallion made a satisfying debut at the 1985 European Championships in Copenhagen, finishing in a respectable 16th place in the Grand Prix and 5th with a strong British team, in which young Christopher Bartle nearly missed the individual bronze on the 17 year old Irish gelding Wily Trout.

A year later Dutch Gold showed for the first time what his real destiny was: the freestyle to music. He flew to Canada to compete in the 6th World Championships near Toronto and was placed 20th as 2nd best British horse of a team, which came in 6th place.
Starters who weren't qualified for the individual final could participate in a Grand Prix freestyle and so did Dutch Gold along with his team mates Pinocchio under Jane Bartle- Wilson and Powdermonkey under Lady Joicey. Dutch Gold proved to be a born freestyle horse with his strong expression, his light and very elegant way to move to frivolous music. With all this he accomplished the imagine of a dancing horse and won the hearts of the Canadian audience, placing third.

After a rather disappointing Grand Prix at the 1987 European Championships on home turf in Goodwood (where he won the unofficial freestyle and later two World cup qualifiers) the most noble of the British dressage horses achieved something his sire could not due to bad luck: to become an Olympian. He was by then the most experienced horse aged 12 and considered to be the best of the British squad.

At the 1988 Olympics Dutch Gold put in quite a good performance in the Grand Prix in the rather noisy Kwacheon stadium in Seoul to come an equal 19th with Danish Nils Haagensen. In Seoul the 18 best riders of the Grand Prix were allowed to compete in the individual final and as Dr. Reiner Klimke's Ahlerich was out because only three starters of a nation could compete in the Spécial Dutch Gold reached the final. He clearly took on the chance and showed a very improved ride with good self carriage and a soft contact with the bit to finish a remarkable 14th in the world.

After Seoul Willow finally started to make himself a name as a freestyle specialist which thrilled even non-horsey people with his great crowd appeal. He set new standards in choreography. In the 1988 / 1989 World cup season he was able to win the European league and placed 4th in the final in Gothenburg, a success no other British bred horse had reached before or later. He continued his steady form to win the kür at the 1989 European Championships in Mondorf les Bains in pouring rain, although no medals were given.
A year later he came 5th in the World Cup final, a success he repeated in 1992, his final year of competition.

At the first World Equestrian Games in Stockholm some months later Dutch Gold contributed to the 5th team place of Great Britain with the highest score and again reached the individual final, in which he finished 13th. Shortly before he had won the famous Swedish Dressage Derby in Falsterbo.

A horse which won six World Cup qualifiers over the past three years, beat Isabell Werth in Berlin and got spontaneous applause during a breathtaking freestyle in Paris could be considered a certain kind of medal candidate when the FEI decided to introduce the freestyle as official part of the 1991 European Championships. After a qualifying Grand Prix the riders had to do either the freestyle or the traditional Spécial to reach for individual glory. To qualify was not such a problem for the 15-year old mature stallion, which appeared quite fresh at the beginning of the freestyle final on a autumn-like Sunday morning in Donaueschingen.

Dutch Gold excelled, went from one movement to the other so lightly and fluently that the crowds had a hard time holding their enthusiasm until the end of the ride. They had seen a real dancer of a horse and the decision of the judges to place Nina Menkowa's Dikson 3rd and Dutch Gold only 4th was not understood by many in the audience.

A year later that remarkable British bred horse, which showed the transition from walk to canter pirouette for the first time ever and allowed his rider to lead him with only one hand through the most difficult movements, was retired to Jennie Loriston Clarke's Catherston Stud where he already had covered during his sport career.

One of his earliest offspring was the eventer Dutch Display, who qualified for the 1994 WEG and later won the prestigious one-day- event in Gatcombe, home of HRH Princess Anne. Dutch Dream, an advanced dressage horse in the USA and spitting image Catherston Goldstorm are approved sons of Dutch Gold, which moreover sired many top class show horses in England. Despite this successful progeny, Dutch Gold's influence in British breeding cannot be compared to that of his sire Dutch Courage. Not because Dutch Gold wasn't of equal quality, but because his father took all the best mares, Jennie admitted.

Dutch Gold's life in retirement was similar to his sire's. He gave displays both ridden and in long reins well into his twenties and bred until his 26th year. Obviously he seemed to miss the razzmatazz of his former life as competition horse. Despite being an extremely well mannered horse to have Dutch Gold would start piaffe in his stable in his later years whenever he saw other horses go into his beloved lorry.

In March 2004 after having been with Jennie for 25 years Dutch Gold became frail and wobbly on his legs. So the hard decision was made to put him down at the proud age of 28. Though he never really lived up to his name and won a gold medal Dutch Gold will be remembered as one of the rare born dancers and reminisced for his tremendous charm and presence performing to music. His rider remembers him as a horse she learnt so much from and she will never forget "the way he looked me in the eye and always tried for me."

The author likes to thank Mrs. Jennie Loriston- Clarke for taking time to answer the questions about Dutch Courage and sharing her memories with her.