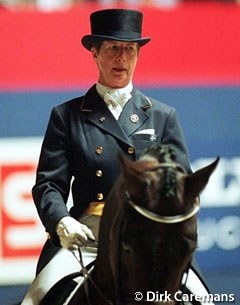 L'Annee Hippique, a wonderful annual yearbook published by the Dutch media company BCM in association with the FEI, has announced that the CDI Rotterdam is the best outdoor dressage event of 2009according to international dressage riders. They based their vote on their opinion of the accommodation, the arena, the prize money, the atmosphere and stabling facility. Year after year the CDIO Aachen has been named the best outdoor dressage show but strangely this year Rotterdam won with the double the votes!! This really knocks us out of our socks as NO show in the world can beat Aachen and if there is such one, it will definitely not be Rotterdam which has the lousiest parking facilities in the world and the most hideous outdoor arena because it is surrounded by a white tent village (the tents themselves are very cool inside though). The whole Rotterdam win sounds more like a promotion stunt because in 2011 the European Championships will be hosted there. The third best scoring outdoor dressage show was Hickstead. The L'Annee Hippique awards will be distributed at the CSI Maastricht on 25-29 November 2009.

73-year old Swedish Olympic rider Ulla Hakanson has bought a new horse. She acquired the 10-year old Rhinelander mare Richelle (by Rivero II x Darlington) in Germany. "She's so nice in the mouth, is never against the leg and has three very good basic gaits. For her trot she could score a 10," Hakanson told Swedish magazine Tidningen ridsport.

Pending final FEI approval, the 2010 North American Junior and Young Riders Championships will be held at the Kentucky Horse Park July 28-August 1, 2010. This is a unique opportunity to use a venue which has been completely redesigned. Less than two months later, the world will begin to arrive in Lexington, KY, for the 2010 Alltech FEI World Equestrian Games.

The 2010 Belgian Dressage Championships have been allocated to Wim Smet's and Shanna Heyndrickx' Stal Hulsterlo in Meerdonk, Belgium. This four-day event will take place on 19-22 August 2010 and features the Belgian Championships for pony, junior and young riders as well as Grand Prix riders. The show will also feature an MSP and Young Horse qualifier.

The Zurich based Urs Oberholzer has resigned as president of the Swiss Equestrian Federation (FSSE) after having been eight years in charge. At a special meeting with the board members of the FSSE on 7th November 2009 in Berne, Charles Trolliet of Montheron, Switzerland, has been elected as his successor. The 56-year old Trolliet has been vice-president of the FSSE since 2001. He is a small animal and equine veterinarian by profession and actively engaged in the organisation of eventing competitions such as Ecublens and Avenches.

Imke Schellekens-Bartels' small tour horse Hunter Douglas Rhapsody has been soldto Gloriana Herrera of Costa Rica. The liver chestnut gelding by Lancet x Rubinstein will be Herrera's horse for the next Pan American Games. The horse was previously owned by the Spijkers family as well as the Bartels Academy.

Cees and Tosca Visser, owners of European Champion Moorlands Totilas, have donated a meet and greet with Totilas and Edward Gal for The Red Sun 4 Stars Charity Fund 2009. On 8th November 2009 a fundraiser was hosted in Blaricum, The Netherlands, where 201,528 euro in total was raised. The Totilas-meet and greet was sold for 9,000 euro.

As the USET Foundation Holiday Fundraiser draws closer, many exciting performances have been announced for the feature event. SUCCEED® and Wellington Classic Dressage will be hosting the Holiday Gala Fundraiser on December 11 & 12, 2009, to benefit the United States Equestrian Team (USET) Foundation. The venue for the fundraiser will be the Jim Brandon Equestrian Center in Wellington, FL. An exciting performance will be a special Pas de Deux featuring Monty Roberts (The Man Who Listens to Horses) and Courtney King-Dye (2008 Dressage Olympian). Roberts performed this Pas de Deux with George Williams at this year's Equine Affair and promises that his December performance will be bigger and better!

Check out this video made on the first day of the FEI General Assembly taking place in Copenhagen this week. The clip includes interviews with Danish Princes Nathalie(Bronze winner at the 2008 Olympics), Princess Haya of Jordan, FEI president, Jim Wolf, Sports Director of the United States Equestrian Federation and Ulf Helgstrand, Chairman of the Danish Equestrian federation. There is also footage of Princess Nathalie performing on her horse and royalties including Princes Haya of Jordan (FEI president) and Crown Prince Frederik of Denmark arriving at the banquet dinner at the Royal Palace Christiansborg. The clip is courtesy woco.dk