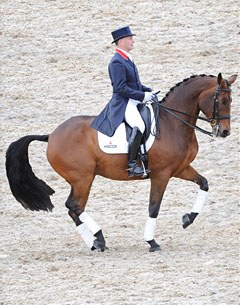 Richard Davison and Hiscox Artemis, co-owned by the Countess of Derby and John Dodd, took the final of Germany’s prestigious Kampmann Future Trophy. The competition is for young Grand Prix horses between 8 and 10 years old.

Held in the city of Oldenburg the competition attracted qualified combinations from Denmark, USA and Holland as well as those from the host country. The 10-year old Westfalian bred Hiscox Artemis (by Florestan x Delphi) won both classes on the programme starting with the warm up class on Thursday evening, the Intermediare II. The following evening saw the Grand Prix and the British pair were on top form again. This secured their place under the spotlight in the winners enclosure and meant they were presented with the coveted Kampmann Final Trophy.

Following the prize giving, Davison said he was delighted with how Hiscox Artemis coped with the atmosphere of the premier event: “It is Hiscox Artemis’ first indoor competition and he, along with other young horses, found it a bit challenging. But that’s what these young horses have got to learn all about. It was an enthusiastic and knowledgeable crowd and had a real buzz about it.”

Hiscox Artemis has had a win at every international meeting he has taken on this season. His next outing will be the London Olympia world cup qualifier in December.

Hiscox is the proud sponsor of Hiscox Artemis and has committed to backing Davison and Hiscox Artemis for the next three years. Responsible for insuring highly valued sport and race horses around the globe, Hiscox also specialises in insurance for owners of high value homes.