Walks
A Walk on the Premises of 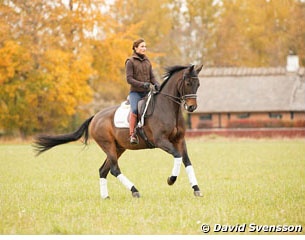 Big dogs on the ground and looming birds overhead are everyday creatures that surround Minna Telde and her horses at the stables at the beautiful village Everlöv on the smooth sand plains outside Sjöbo in southern Sweden.

I arrived at the EMV Dressage stables at Everlöv, home to Minna Telde's horses, about half an hour drive from Flyinge and Minna who had just finished riding a horse in the arena came to greet me on foot.

"Did you perchance read Xenophon's Peri Hippikes?" I asked. (On Horses And Riding). "No, I didn't, why?" she asked. " You removed the spurs," I answered. Already 300 something BC Xenophon talked of the importance for a true rider of removing one's spurs once getting off your horse and never walking around strutting spurs on the ground.

"So, he was right then. That is how it is, you must remove the spurs," Minna said with a smile, as we went over to her horse truck to get her jacket.

Her newest dog Windy, a 4 year old Rhodesian Ridgeback, eagerly joined in, dashing up the steps to the living quarters of the truck. "She loves going in the truck. Loves to follow around everywhere," said Minna.

Windy came as part of the bargain when after a four year long search Minna finally bought her own horse farm in a nearby village, which is now being renovated. She'll move her horses there soon.

One of Minna's grooms, Tina from Finland, brought us the 8-year old Dutch bred and Danish registered gelding Jazzmataz, Minna's latest addition to her stable.

As Minna prepared to mount her horse I saw a small gray kitten getting dangerously close to the Ridgeback Windy. What then happened was a very pleasant surprise. Ridgebacks were originally bred to hunt lions, and this I knew. Four Rhodesian Ridgebacks will take one lion, I was once told by a Ridgeback owner. And lions are very big animals, with big teeth. This was just a little kitten, so I was expecting violence and the immediate need for a cat vet. Or worse.

But none of that happened. Dog and cat like each other.

"Windy likes to think all creatures are her children, so she takes care of the kitten", Minna explained. Windy started licking the furry kitten and the friendship was obvious.

The kitten was really pushing its luck. Windy has a long tail and most of the time it is wagging. Wagging objects are irresistible to cats, it seems. The kitten sneaked into position behind Windy's tail and moved its front paw to the ready-to-give-a-good-whack-with-claws-extended position.

Now I was concerned again, but I had faith in Windy's good humour, so I kept photographing. Let me put it like this: this is one out-of-this-world tolerant dog and one really lucky cat. Good for them. When the cat whacked the tip of the dog's tail, Windy just gave the kitten a long "Don't you do that again" look. Let's just hope the cat does not try its luck with this trick on one of the Dobermans around the stable...

Minna was on the horse and we walked along the driveway to a nearby harvested hay field. Windy did her best to clear the field for us and scared off all rabbits. Minna began warming up and exercising Jazzmataz in a very relaxed way. He's quite a mover, I'd say, and a pleasure to photograph. Jazz has just been with Minna for a few months, and obviously he has learnt to ignore big and very fast running rabbits chased by dogs.

Training done, we went back to the stable, Minna took the tack off Jazz, and we began talking about the 4-year old Swedish warmblood stallion Isac (by Hip Hop x Master). Isac is developing in a very nice way. A few weeks ago Isac got the third place in the 4-year-old dressage class at the 2009 Swedish Young Horse Championships in Flyinge.

The grand news of the day is that Isac's owner and Minna have decided to really make a go for it. They are of today one of the Swedish contenders for a spot on the Swedish team at the 2010 World Championships for Young Horses.

I saw the 4-year old finals at flyinge, where each horse was ridden by two expert test riders, Per Sandgaard and Anna Blomgren, and then judged by both test riders and a panel of judges. I think it is very interesting to see the same two skilled riders on each of the horses and then compare how their elegant but individual style of riding work on the different horses.

Isac got very fine marks from the test riders and the judges alike.

A Drop of Blood

"How was his performance in the qualifying round some days before, when you rode him yourself?" I asked Minna. "I was very pleased with Isac in the arena. He is fantastic to ride and he gives you a very good feeling," she replied. "Unfortunately he bit himself in the lip during the performance and I did not notice it while riding."

"There were three horses in the arena at the same time. It's very good for the young horses to be in the arena with others to perform as good as they can. But when we had finished the last part of the program and as we walked past the judges' table, the judges noted blood on his mouth and told me that. That was quite a cold shower, to say the least. Isac had felt fine and happy, so I very surprised."

"The judges decided to let us stay on in the arena and hear the scores and comments on our ride, and also to let us remain in the competition, as the problem was not noticed by the judges until the program had already ended. That was their decision. At that time, I thought that we were out of the competition."

"Once we got outside the arena, I and the supreme judge Birgitta Ernblad checked his mouth and we found a small wound on the outside of the upper lip, at the very front. By then it had already stopped bleeding, so it was actually a little difficult to find the wound itself," Minna continued. "We had a veterinarian look at the lip so it was documented."

Later a protest was filed to the organizers of the championship. The protest argued the judges ought to have noticed the problem earlier and eliminate Isac from the class during the ride. A day later the protest was dismissed by the the officials. Isac started in the final and finished third.

I and Minna walked over to Isac's paddock at the stables. He's quite a tall horse, and a 4-year old stallion that loves being cuddled.

"He's a very calm and relaxed horse. I have great expectations for his future performances," said Minna.