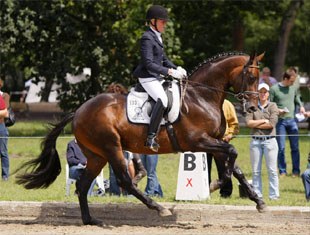 The P.S.I. auction collection stallions Grand Passion and Donaugold shone at the Gala evening during the Trakehner stallion licensing in Neumunster, Germany, on October 25, 2009. Möller and Hansen presented these two licensed stallions to a sell out crowd in the Holstenhalle.

The 4-year old Grand Passion (by Oliver Twist x Polarion) was the Trakehner Licensing Champion in 2007 and became Trakehner Champion of the 4 year old stallions. His dam Gipsy Rose is a full sister to Grafenstolz, the Young Horse World Champion in eventing. Her sire Polarion was successful at Grand Prix level with Markus Gribbe as well as the European bronze medallist Laura Bechtolsheimer. Under Dr. Ulf Möller Grand Passion impressed the crowds with his beauty and super basic gaits. His canter earned a 10 at the Trakehner Championship