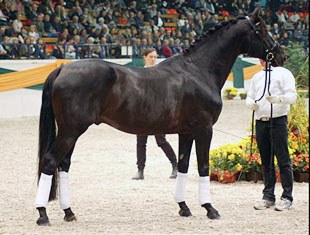 Cadeau and Kasparow have been proclaimed Elite Stallions at the 2009 Trakehner Stallion Licensing in Neumunster, Germany, on October 25, 2009.

Gestüt Hörstein's Cadeau (by Silvermoon - EH Caprimond) is bred in Denmark and was approved as a premium stallion at the 2001 Trakehner Stallion Licensing in Neumunster. He sired three licensed sons, Occacio, Monseigneur and Irdenkreis. Under Dorothee Schneider Cadeau was successful in dressage competitions up to M level. He has been stationed at Hörstein his entire career.

The black stallion Kasparow (by EH Sixtus - Kostolany) was also proclaimed elite. He is bred by Bernd Berge in Germany and is owned by Arja van der Laarse from The Netherlands. The stallion was approved after his performance test and sold via the Klosterhof Medingen Elite Auction. Hhe is the sire of the outstanding stallions Titulus, Insterpark and Redecker. He competed at Prix St Georges level and did CIC* eventing

"Interestingly both stallions have close ties to Gestüt Hörstein," said Maren Engelhardt of Trakehners International. Kasparow's sire Sixtus is the chief stallion there and both carry the blood of the new "Stallion of the Year" Kostolany."