Wüst's Plan: The Standardization of the Degree of Difficulty 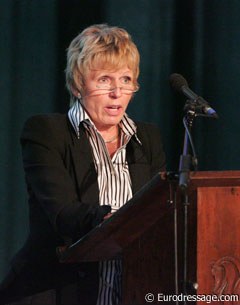 The most inconsistencies in judging are in the Kur to Music due to the non-existence of a code of points for the degree of difficulty and the limited musical and artistic knowledge of the judges. At the Judging System Trials in Aachen begin September, O-judge and Dressage Task Force member Kathrina Wüst took the first step for the improvement of freestyle judging.

Wüst launched her idea to standardize the degree of difficulty in the kur in Aachen and at the Forum she presented her brain child in detail. "Difficult" implies difficult movements or a combination of movements, difficult transitions, appropriate repitition of movements, performing more than the minimum amount of steps or changes, and reins in one hand. All these difficult movements of course depend on the precondition that they are well executed, which means a technical mark of 7 or above.

Difficult movements in the kur should be classified in three grades. Depending on a good or bad execution riders can earn bonus points or lose points (malus). The starting point is the neutral level of 6.0 in which the rider performs the required minimum. They score bonus points if execute a movement better than a 7 and get points subtracted when they perform it below 6. This prevents a rider from overasking his horse.

Riders will need to hand in a CD and a plan of their choreography one day before the competition so judges can assess if the test was performed according to plan. "The rider can fix his own degree of difficulty," she said.

The judges’ panel will be divided into three groups. Group 1 will judge the technical level, the second will look into the artisticity (harmony, choreography, music) and the third will mark the degree of difficulty. "They will sit together and jointly evaluate the degree of difficulty according the bonus/malus system," Wüst explained. "They will be equipped with an instant replay video system so they can see a replay when in doubt."

Wüst admitted that of more than 100 freestyles she reviewed for her project, only one rider has a freestyle with a degree of difficulty of 10: Isabell Werth on Satchmo.

One issue, however, was clearly overlooked or at least not incorporated in Wüst's program, i.e. "riding synchronous to the music." When an auditor asked if a flying change executed exactly to the music is considered a difficult movement, Wüst explained that this aspect will not be included in the "degree of difficulty" but belongs to the category of music, harmony and choreography. Though the definition of the Kur embodies riding synchronously to music, it has never been properly judged so far and needs as much investigation as Wüst's standardization of the degree of difficulty.