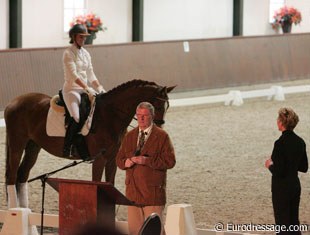 Heike Kemmer and German professor Eckhard Meyners spoke about the importance of physiotherapy and body awareness for riders to improve their seat. Kemmer was one of the first Olympic riders to realize how dressage riders function biomechanically.

She started working with seat guru Meyners five years ago after meeting him in Warendorf and their collaboration positively influenced Heike’s performances on Bonaparte (by Bon Bonaparte). She was the team gold and individual bronze medalist at the 2008 Olympic Games in Hong Kong. Meyners travels to Heike's stable Amselhof Walle once every two weeks and every week before a competition. "He's the special carrot in my stable," Kemmer quipped. 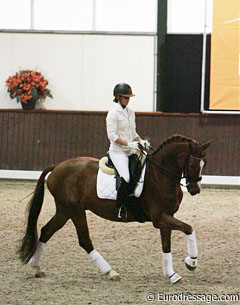 Meyners opened his exposé by stressing the importance of movement and motion awareness. "Form follows function and not the opposite," Meyners stated. "The body must function by itself and the rider must only focus on the horse." The upright seat is structured on six points: the head, the sternum area, the golgi system (hips/pectoral - responsible for body saftey and prevents bones from breaking), the sacroiliac joint, the flexibility of the pelvis and the correct forward driving aids. "Only when riders are in good shape, horses can be in good shape." By improving one's body awareness and flexibility the rider can tune into the horse's movements better at the right time.

The first rider to enter the ring was Belgian FEI rider Julie de Deken on her rising Grand Prix horse Fazzino (by Florestan x Rivellino xx). Meyners and Kemmer first inspected Julie's seat after which she had to dismount and do floor exercises. She had to lie down on back and belly and make rotating and upward movements at different speeds with her shoulders and pelvis to loosen up her muscles. When she mounted her horse again Julie said she felt a big difference in the saddle, though she didn't feel more comfortable because of the change. 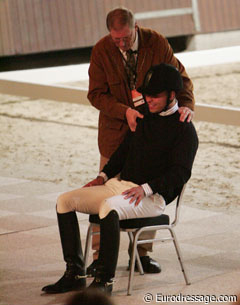 Meyners hit the nail on the head when he said that adults are very limited in their flexibility of their body. "Children play all the time but grown ups are more stiff. That's why they have problems with their body."

The second rider to enter was Moroccan born Yessin Rahmouni and his Grand Prix horse Only Society. His horse moved in a very tight uphill frame with the rider sitting deep and quite stiff in the saddle. He had some problems keeping the tempi changes straight. Meyners asked Yessin to take a seat on stool with rotating seat. By making movements with his pelvis backwards and forwards on it, Rahmouni was able to loosen his seat. Meyners also massaged Yessin's neck and shoulders. 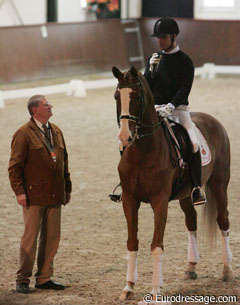 When he got back on his horse, Yessin felt a great difference. "This was really better, the changes are much more easy. My body is going with the flow," Rahmouni commented. Meyners added much humour in his speech and joked, "your horse is now 10,000 euro worth more."

Kemmer summarized the importance of physiotherapy for riders by saying, "we can give smaller aids because we control our body much better. We are less tense. We work from head to feet and need about an hour. We only take small steps forward." Meyners added, "If the rider doesn't feel the changes, than there is no change. The horse almost always changes."