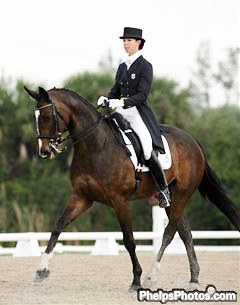 It never rains but it pours. Ten days after American Olympic team rider Courtney King-Dye had to have her Olympic mount Harmony's Mythilus euthanized, she had to part with another one of her top FEI horses, Rendezvous. The bay Grand Prix mare crushed her pastern bone and had to be humanely put down.

Francine Walker's Rendezvous was a 14-year old Austrian warmblood mare by Rio Negro out of Chimera (by Pasha) and bred by Alois Papik. She shattered her pastern bone down to the cannon bone in a tiny turnout paddock. “She did one little buck, kicked up her heels, and the groom heard a sound like she had kicked the fence,” King-Dye told Ken Braddick of Dressage News.

“We consulted with the veterinarians on every possible way to save her," said King-Dye. "We were told there was a long shot that the bone could be pinned so RV could eventually be saved to become a broodmare. But even that was doubtful and would require a minimum of one year of stall rest. It could have been a lot of suffering for her.”

Under King-Dye, Rendezvous made her international break through in 2006. The combination was highly successful at small tour level in 2006 and 2007. They made a transition to Grand Prix in 2008. Courtney had planned on taking Rendezvous to Florida for the 2010 show season.