Richard Davison Honoured With HOYS Equestrian of the Year Award 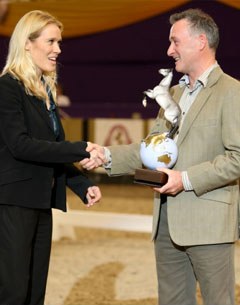 Richard Davison’s dedication and commitment to dressage was recognised at the Horse of the Year Show on Friday 9th October 2009 when he was presented with the HOYS Equestrian of the Year Award 2009.

The award celebrates the considerable success he has achieved in his career to date.

An Olympian and European silver medallist in his own right, this year Davison led the triumphant GB dressage squad to team silver and an individual bronze medal at the European Championships in Windsor in his role as Team Captain.

Davison has juggled this with a successful international competition schedule of his own, achieving five grand prix wins in succession with his new international prospect, the Countess of Derby’s Hiscox Artemis.

The award was presented in the main arena after Davison had hosted a mini master class alongside respected international judge and rider Judy Harvey and riders Amy Stovold and Kate Attlee. Previous winners of the prestigious Equestrian of the Year title include Paul Nichols, Pippa Funnell, Zara Phillips, Jeff Osborne and Leslie Law.

“It was a complete shock on the night but I’m thrilled” Davison commented “It’s been a phenomenal year for British dressage and I’m very proud to have been part of such a strong Team GB. It’s an absolute honour to receive this accolade.”