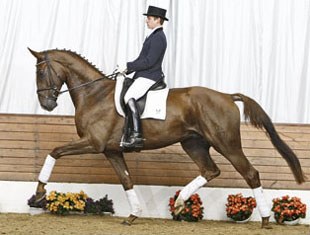 The 4-year old liver chestnut Hanoverian Dante's Peak achieved the top knock down price at the 2009 Hanoverian Autumn Elite Auction in Verden, Germany on October 10, 2009. The Werndl family acquired the Dimaggio x Wolkentanz I offspring for 320,000 euro. The big liver chestnut stood out with his elasticity and swing especially in the trot.

Seven dressage horses out of a collection of 83 sport horses sold for more than 100,000 euro. The second most expensive horse was Royal Rose, a Hanoverian mare by Royal Highness x Davignon x Weltmeyer, which sold for 165,000 euro to a dressage stable in North Rhine-Westfalia. 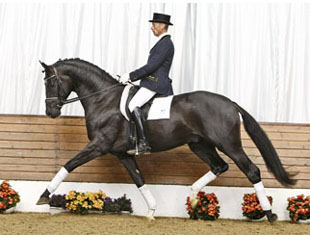 This gorgeous black was the 2009 Bundeschampion and was acquired by stallion owner J.P.Aggesen. He will be trained and competed by Andreas Helgstrand.

The best selling show jumping was the licensed stallion and performance test winner First Edition (by For Edition x Grand Cru). He sold to the Royal Moroccan Army for 90,000 euro. The Moroccan army acquired five more horses in this auction.