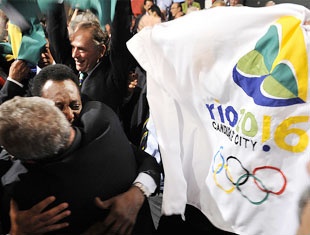 The International Olympic Committee (IOC) has elected Rio de Janeiro (Brazil) as the host city of the Games of the XXXI Olympiad in 2016 during its 121st Olympic Congress in Copenhagen, Denmark. Rio de Janeiro received 66 votes compared to Madrid’s 32 in the final round of voting.

IOC President Jacques Rogge congratulated Rio de Janeiro on its election and praised the high quality of the bid, “I would like to congratulate the city of Rio de Janeiro on its election as the host of the 2016 Olympic Games. Rio de Janeiro presented the IOC with a very strong technical bid, built upon a vision of the Games being a celebration of the athletes and sport, as well as providing the opportunity for the city, region and country to deliver their broader long-term aspirations for the future. This call to “live your passion” clearly struck a chord with my fellow members and we now look forward to seeing Rio de Janeiro stage the first Olympic Games on the continent of South America. Well done, Rio!”

Rogge also thanked the other competing cities of Chicago (USA), Tokyo (Japan) and Madrid (Spain), “Unfortunately, there can only be one victor in this competition and I’d like to thank the cities of Chicago, Tokyo and Madrid for participating. Their projects and dedication to spreading the Olympic values throughout their countries and beyond has been outstanding. Despite not being elected today, these cities have all seen the benefit of being candidates for the Games. I would like to congratulate them all for their efforts and for their commitment to the Olympic Movement.”