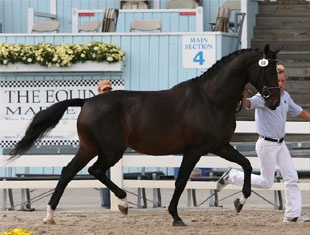 Day two at prestigious Dressage at Devon continued with more champions in the breed ring. The day offered a bit of déjà vu as many of the big winners have had their names announced in Devon's legendary Dixon Oval in years past. Among the champions, the stunning Rabiola, an 11-year old KWPN (the Royal Warmblood Studbook of the Netherlands) mare owned by Iron Spring Farm, who clinched the Mare Championship for the third year in a row with the unbelievable score of 94.00%.

"It's certainly the highest score that I ever remember in the Breed Show," says Lori Kaminski President and CEO of the organization, who has also been involved with the Breed Show at Dressage at Devon for 15 years.

Judge Janine Malone explains, "Rabiola has an exceptional trot and a true presence." The Victory Garden at Devon is a like a second home for the impressive mare bred in the Netherlands by P. Crum. She is by Metall out of Fabiola and was the Dressage at Devon Grand Champion in 2006 and Reserve Champion in 2008. Claiming the Reserve Mare Championship was China Doll, a four-year-old gray Oldenburg by Cabaret out of Elena, bred by Heinz Wulf.

Another name familiar to Dressage at Devon fans is also an Iron Spring horse, the KWPN stallion Sir Sinclair, who broke Dressage at Devon records by becoming the winner of the Get of Sire class for a fourth year in a row.

The Stallion Championship followed the mares and Pikko del Cerro HU wore the Champion's sash. The six-year old Hanoverian by Pik L out of Rohweena by Rohdiamant, recently crowned National USEF/Markel Six Year Old Young Horse Dressage Champion, was bred by Anne Sparks, CEO of Horses Unlimited. "I couldn't be happier," she said. "Pikko del Cerro is the first baby I saw born, and the culmination of nine years of planning. I purchased Rohweena just for Pik L. It was so exciting to see Cerro earn the championship in this arena." The engaging North Forks Cardi took the Reserve Stallion Championship. Bred by Carol Holcombe, the handsome bay stallion measures just 14.3, but had a mighty presence as he trotted around the Dixon Oval. He also won the Great American Insurance Group/United States Dressage Federation Breeder's East Coast Championship for Stallions, as well as the Born in the USA Stallion.

The colorful tradition of the Born in the USA Breeders' Awards continued with all the winners--fillies and colts through stallions and mares--decked with red, white and blue sashes. The awards originated at Dressage at Devon to bring attention to and honor American-bred horses. Iron Spring Farm again took top honors with Calypso ISF, a two-year old Dutch warmblood by Contango out of Toraya.

The top two girls took on the top two boys in the Mature Horse Championship, and the girls ruled, with Rabiola crowned Champion and China Doll Reserve Champion. A beaming Mary Alice Malone, owner of Rabiola, said, "I'm a really lucky lady to have such a beautiful horse. She's gorgeous, a wonderful mover, has a great temperament, AND she makes great babies."

Janine Malone declared the mare quality overall at this year's Dressage at Devon "excellent. Judging the Breeder's Group and the Produce of Dam, I found the quality overall to be very high--modern types with uphill movement." She said the quality of such breeding mares is already apparent. "We're already seeing more US-bred horses who are able to compete at the top of their sport."

The day culminated with the Grand Championship, and a bit of a turnaround, as Rabiola was announced as Reserve Grand Champion with Perfect Qredit taking home the breed show's biggest honor. Champion of Monday's Young Horse division, the chestnut stallion, a Quaterback son and out of Dream Rubina by Dream of Glory, was bred by Yancey Farms. Perfect Qredit is Michelle Coursin's first dressage horse.

The competition continues at Dressage at Devon through the weekend. The Breed Show wraps up with numerous breed classes, and the Performance Show kicks off Thursday with the USEF Dressage Test for Four-Year-Old Horses, introduced to North America at Dressage at Devon in 2005, as well as the FEI Dressage Tests for Five and Six-Year Olds. The Performance Show continues through Sunday highlighted by four Grand Prix classes and numerous other FEI-level classes.