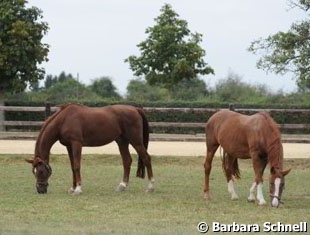 Gigolo's general health condition deteriorated rapidly following an injury and the veterinarian decided it was in Gigolo's best interest that he was euthanized.

"I'm so sad," Werth said. "Gigolo became 26 years old and he accompanied me for over 20 years. He was my friend, schoolkmaster and comrade. His reliability and willingness to work were two of his extraordinary traits. 26years old is a respectable age for a horse and I'm happy that I was able to give him a very nice retirement after his sport career."

Gigolo was bred by Horst Klussmann in 1983 and was by Graditz out of Bunett (by Busoni xx). He was acquired by Werth's initial sponsor and trainer Uwe Schulten-Baumer in 1989.

Gigolo is currently the most successful dressage horse of all times. Under Isabell Werth he also won Olympic gold at the 1996 Olympics in Atlanta and he claimed individual Olympic silver twice. He was double World Champion and four times European and German Champion.

Gigolo was retired from competition at the Stuttgart German Masters on 24th October 2000 and he enjoyed his retirement at Isabell Werth's stable in Rheinberg.

"Gigolo spent his days in the field with his friend Fabienne," said Werth. "He was so decisive in my life and I can look back with great gratitude on our years together. I'm sure Gigolo won't be forgotten."