Training With a Master: Georg Wahl 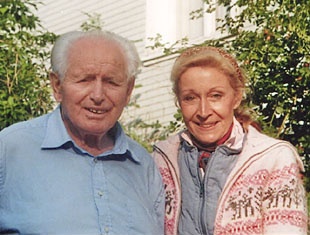 In 1979 Christine Stückelberger and Georg Wahl bought an old farmhouse in a small village  near Wil in the St. Gallen region and transformed it into a little jewel of a property.

The small farmhouse, the cottage for the working pupils, stables, outdoor and indoor arena all nestle in a hill at the outskirts of the village, surrounded by pure nature with a clear view over green hills and with the imposing Swiss mountains behind.

Horses look out of their windows, which are decorated with flower baskets, which the lord of the mansion, Mr. Wahl, has planted. Dogs, from the typical Jack Russell to a Spanish crossbreed, flit around every corner. A small Falabella pony, a gift by circus director Fredy Knie became mascot of the barn and looks cheekily from the field next to the indoor arena.

It's the overall atmosphere of quietness and peace that welcomes every visitor at “Hasenberg”, the place where Grand Prix horses of world format such as Granat, Rubelit von Unkenruf, Tansanit, Gauguin de Lully CH and Aquamarin were trained over the past thirty years by Georg Wahl and his partner, his most successful pupil Christine Stückelberger.

But what does this training look like, which pupils praise as unique and horse friendly?
One cannot fully understand it without knowing a little bit of Mr. Wahl's life story.

Georg Wahl, born in 1920 in Oberschlesien (today Poland), was the son of a carriage-horse trainer and was always interested in horses. As a 17-year old he joined the German cavalry in East Prussia. There the most famous leader of the Spanish Riding School ever,  Oberst Alois Podhajsky,  also the 1936 Olympic bronze medal winner on Nero xx,  scouted him. Wahl joined the traditional Riding School in Vienna in 1940.

His talent was so obvious and as the school was in need of riders he was allowed to participate in the demonstrations of the school early on, which was something exceptional.
After a short period at the front line in Hungary he went back to the Spanish Riding School, where he stayed until 1951.

Afterwards he worked with the well known circus director Fredy Knie senior in Switzerland for five years. Wahl will later say that he had learnt a lot about the psychology of horses through Knie, whose training methods of circus horses were revolutionary because of their non-violent way. They stayed befriended until the death of Fredy Knie senior in 2003. Wahl returned to the Spanish Riding School in 1967 as “Oberbereiter” and finally resigned in 1971 to work freelance.

Wahl is blessed with a special feeling to handle even the most difficult horses -- difficult in temperament, difficult in character or difficult because of their history. The keys of his training methods are patience, much praise for the horses and honest criticism to the riders sitting on them.

His specialty is to work the horses in-hand. Often a training session will begin with this exercise. A working pupil holds the horse at the cavesson and Mr. Wahl touches its hind legs masterfully with a whip to encourage it to show half-steps or piaffe. He never stresses or punishes the horses during that. His calm attitude and the praise which follows immediately with pats, sugar and encouraging words are also a part of his ability to bring the best out of his horses. They all show wonderful lowered hind legs, a rare picture in today's dressage, where real collection and sit are often sacrificed for sensational, electrict and elevated steps.

Wahl always pays much attention to the fact that the horses use their hind legs properly in every exercise while having their noses slightly in front or at the vertical. He is a master of detail and can explain every exercise precisely to his pupils, but he also takes care that the horses work over the back and are supple so that all looks easy for the spectator.

Wahl has the very rare ability among humans to communicate with horses in their way, which helps enormously when he works with those coming from different trainers. There they have experienced stress or too much work too soon and those horses gain confidence and happiness again after some time at “Hasenberg,” as do their happy owners.

The young horses join the stable as three and four-year olds. Often Christine has bred them herself, sometimes there are horses bought at auctions. The youngsters are lunged first, later broken in and ridden on big circles to gain their balance. The older or competition horses are properly loosened first, before they start their daily training session which differs from horse to horse. One will work on a special weak point, another will exercise a program it must show at the next show, another will just have gymnastic exercises. Every training session ends with a short hack into the beautiful countryside to cool the horses down, before they get some in-hand grazing from their groom or from Christine herself.

The horses at “Hasenberg” won't see their master every day. Nearing his 90tieth birthday Mr. Wahl is still traveling a lot to give clinics in Switzerland and abroad. Naming all his pupils would fill a book as they came and come from all over the world. Some are international judges like O-judge Beatrice Bürchler or Dr. Barbara Gorsler.

To close the circle of life Georg Wahl had returned to his old love, the Spanish Riding School, about five years ago. It was the wish of the riders there to have Wahl for some training sessions every month. He was honored for his life's work in Vienna in 2007 by the minister of Austria and is an honorary member of the “Xenophon Classical Riding” organization since 2008.

Christine Stückelberger has inherited Wahl's way of training, but there are also some really young riders, who have been taught his system. One of these is Corinne Daepp, who worked with Wahl and Stückelberger for five years and was their head groom and head rider till 2000. She is freelancing now in Berne as trainer of classical dressage. Another is Joy Morf- Studiger, a former Young Rider of the Swiss team, who is one of only a few Swiss hopefuls with an outstanding young horse, regularly trained in-hand by Mr.Wahl.

Something special about Mr. Wahl is that he is never tired to explain dressage to spectators, who attend his morning training sessions at “Hasenberg”. If somebody is really interested in dressage he spends a lot of time answering questions and enjoys the interest in his work and his sport. He is a master in this, too.