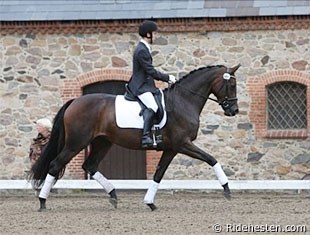 Fabrix Miss Ésandri has been proclaimed Mare of the Year at the 2009 Danish Warmblood Elite Mare Show held in Vilhelmsborg, Denmark, September 4 - 6, 2009. Three gold medal winning mares battled for the Mare of the Year title in the champion's ring.

The dark bay 3-year old filly Fabrix Miss Ésandri is by Sandro King out of Miss Champo xx (by Quilted xx). She is bred by Lene and Claus Brix from Randers, Denmark, and she was also last year's 2-year old champion mare. The judges praised this mare for her exceptional type, beauty and solid conformation. All this combined with three very good basic gaits and a big rideability.

Gørklintgårds Gaya was named this year's 2-year old champion. The dark bay Sunny Boy x Come Back II offspring is bred and owned by Jørgen Ravn. This mare excelled with the elasticity in her movements and her large frame with well functioning top line. 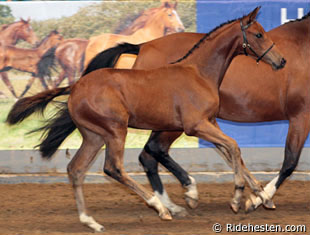 Out of approximately 1000 mares that were presented at various gradings throughout the country, the 45 best were picked for the Elite Mare Show. Five mares won a gold medal, twelve got silver and twenty-eight received a bronze medal.